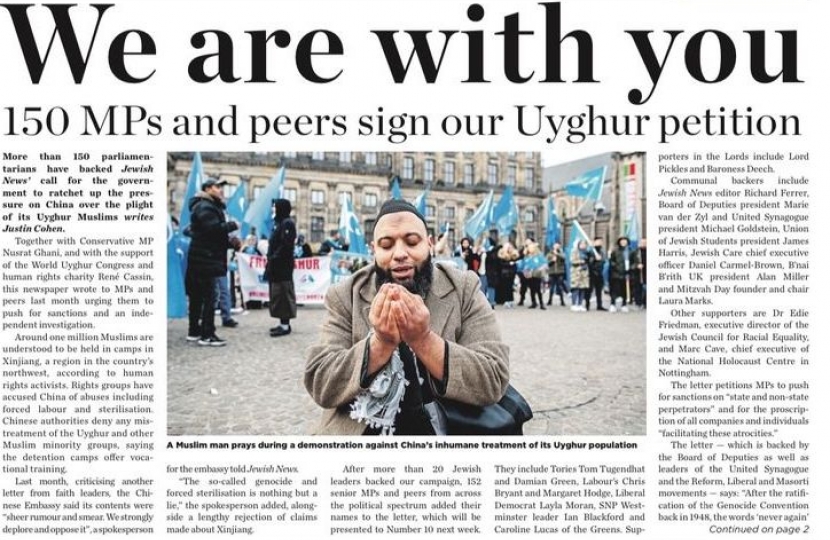 The Magnitsky sanctions announced by the Foreign Secretary in July 2020 was a landmark moment for the United Kingdom, as it sets a new international gold standard for holding countries and individuals who violate human rights across the world accountable. However, while the Magnitsky sanctions focus heavily on the targeting of Russian individuals, there is a noticeable absence of citing human rights violations of the Uighurs in Xinjiang, China.

There is overwhelming evidence that the Chinese regime has been engaging in state-sponsored ethnic cleansing. Recently, a video re-emerged on social media, showing shaved men and women blindfolded and marched on to trains in Xinjiang.

However hard the Chinese Ambassador defended the Chinese Communist party's (CCP) version of life in Xinjiang, more footage of abuses and testimonies of traumatised survivors is coming to light. Women have shared stories of sexual abuse, with some reporting that they were forced to undergo abortions, have contraceptive devices implanted, or be fully sterilised. Population growth rates in the Uighur heartland plummeted by 84% between 2015 and 2018.

I have received an overwhelming volume of correspondence on the issue from Wealden residents. Like them, I am deeply concerned about China’s actions in Xinjiang. China’s suppression of human rights meets the United Nations definition of genocide and it amounts to the largest incarceration of an ethno-religious minority since the Holocaust. I urge the Foreign Secretary to use the United Kingdom’s moral and legal authority to proceed quickly on the basis of the overwhelming evidence in Xinjiang.

I has written various articles on the topic for national media. You can read them by clicking on the links below:

I am currently leading a parliamentary select committee inquiry which will explore the extent to which business in the UK are exploiting the forced labour of Uyghurs in Xinjiang. This inquiry will help to get a clearer picture of the extent of the problem regarding UK-Xinjiang supply chains and recommend what steps the government could take to ensure that businesses and consumers in the UK do not perpetuate forced labour and human rights violations. For more information, please click here.

GHANI WELCOMES PARLIAMENTARY DEBATE ON THE PLIGHT OF THE UIGHURS

Nus Ghani, MP for Wealden, welcomes a parliamentary debate on China’s policy on its Uighur population.

I am working with The Jewish News to help end the plight of Uighur slave camps. I am grateful to the 150 colleagues from across the House of Commons and House of Lords that have come together to support the campaign and denounce the horrific human rights abuses of Uighur minorities.

There must be no place to hide for companies complicit in human rights abuses – Britons deserve transparency so they can make informed choices as consumers.

I have written an article for The House Magazine. You can read it here.

I am very pleased to announce that I will be leading a parliamentary select committee inquiry which will explore the extent to which business in the UK are exploiting the forced labour of Uyghurs in Xinjiang.

Nus Ghani, MP for Wealden, is urging the Government not to stay silent on China’s ethnic cleansing of the Uighurs.

We cannot pick and choose which human rights abuses we acknowledge. The UK must send a clear message to all those who would threaten human dignity - no matter how big and mighty they may be.

Rabbi Laura Janner-Klausner and I have written an article for Politics Home. Read it here.

It's time for the West to stand up to all those who violate basic human rights, as the Uighur Muslims face wipe out in Xinjiang

Read my article for the Telegraph below 👇🏾