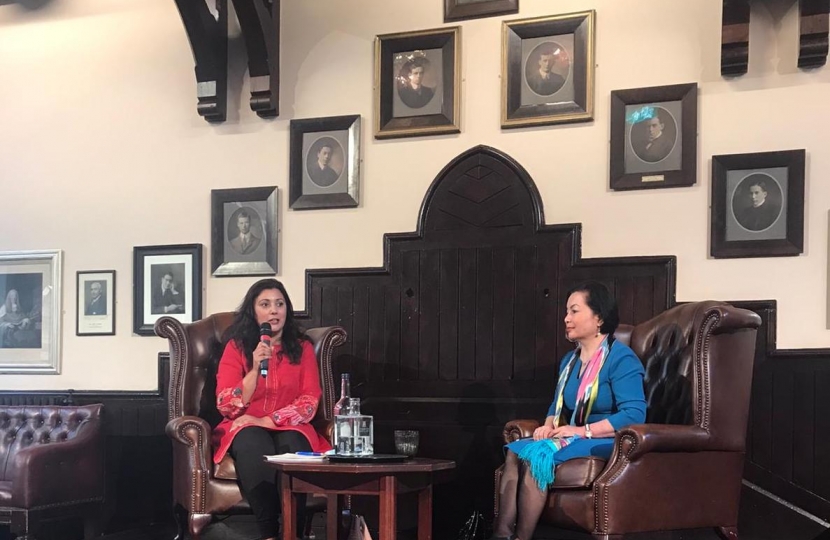 Despite ominous calls for it to be cancelled, Nusrat Ghani, MP for Wealden, spoke at a University of Cambridge Union event discussing Xinjiang. During her speech, she highlighted the plight of the Uyghur and her work on exposing Uyghur slave labour in UK supply chains and preventing the Government from trading with genocidal states.

Nusrat was in conversation with Rahima Mahmut, a Uyghur singer, UK Project Director for the World Uyghur Congress, human rights activist, and advisor to the Inter-Parliamentary Alliance on China. The pair debated the harrowing evidence of China's gross human rights violations taking place in Xinjiang, a north-western province in the country, where over a million Uyghurs are enslaved and subjected to state-orchestrated genocide.

Nusrat and Rahima work on many projects together, including Nusrat’s Business, Energy and Industrial Strategy Committee report, which examined Uyghur slave labour in UK supply chains and gaps in the Modern Slavery Act. It was the publication of this report, and her rigorous campaigning to make amendments to the Trade Bill, that led to Nusrat’s recent sanctioning by the Chinese Communist Party (CCP).

Nusrat Ghani said: “It was a pleasure to speak at this event and I thank Rahima for her tireless campaigning on behalf of the Uyghur people. I will not back down to bullies even if they are as powerful as the CCP and I will continue to use my freedom to shine a light on China’s activities. Since my sanctioning, I successfully led a historical motion where the UK Parliament unanimously declared a genocide for the first time in its history, triggering a number of similar events in parliaments around the globe. Our hard-won parliamentary democracy will always stand up for what is right and remain free from foreign interference.”

You can watch the whole event here.