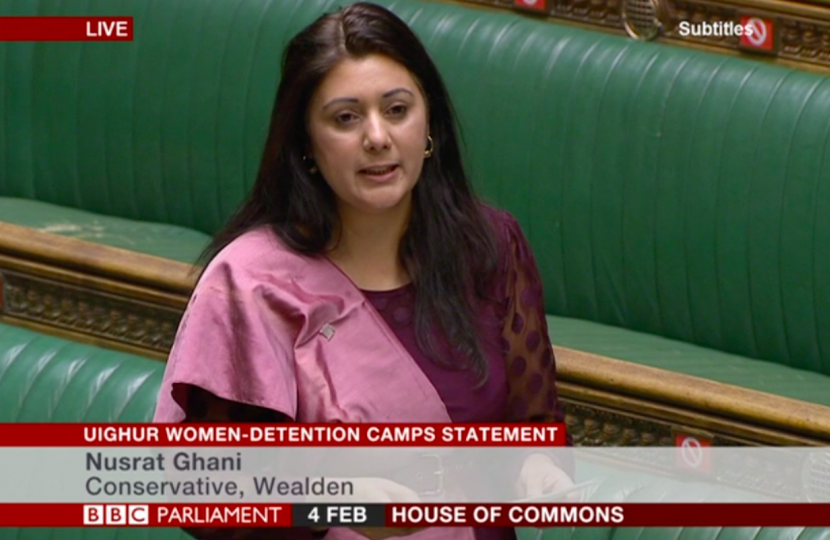 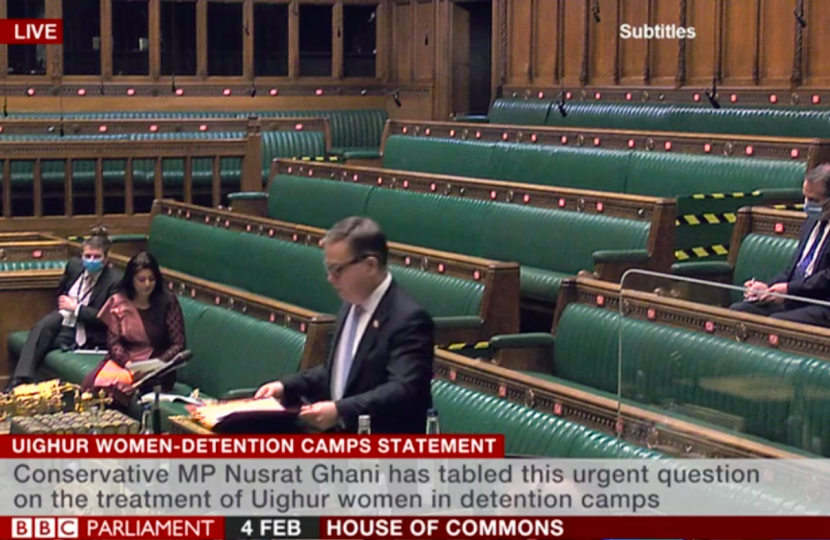 Nus Ghani, MP for Wealden, has secured an Urgent Questions in the House of Commons today, in response to the barbaric state-orchestrated torture of Uyghur women incarcerated in Xinjiang “re-education centres”.

This comes following a new report and documentary released by the BBC last night, containing heart-breaking testimonies of former detainees and revealing further evidence of systematic rape, sexual abuse, forced sterilisation and torture of Uyghur women by the Chinese state.

Nus has long been a strong advocate for the Uyghurs and raised human rights atrocities in China with the Government many times over the past year. She is currently also leading the Genocide Amendment to the Trade Bill, which will allow the Government to take meaningful action against genocide trade.

Today, she probed the Foreign Secretary on how the Government was going to get the court judgement it needed to act, when all international routes are permanently paralyzed by China, and urged the Minister to make a promise that no further deepening of any ties of any kind will take place with China until a full judicial inquiry has investigated these crimes.

Nus Ghani said: “Yesterday, the BBC broadcasted a harrowing footage of Chinese state-orchestrated abuse against Uygur women on an unprecedented scale. These horrifying stories add to the huge and growing body of evidence detailing atrocities perpetrated by the Chinese authorities in Xinjiang. Atrocities which may even be genocidal. These horrors have led the President of Board of Deputies of British Jews to compare the plight of the Uyghur to the Holocaust. But there is no prospect of China being held to account through the International Criminal Court or the International Court of Justice, as China holds the power of veto at the UN Security Council. We cannot be bystanders to the deliberate attempt to exterminate a group of people. Not again. The United Kingdom cannot stand by and do nothing about the extermination of the Uyghur – mass rapes, scalping and forced sterilization. We can act and we must act. It’s time for Britain to be on the right side of history.”

The BBC report is available here.

For more information about Nus’ work leading the Genocide Amendment to the Trade Bill, click here.

For more information about Nus’ campaign against human rights abuses of the Uyghurs, click here.