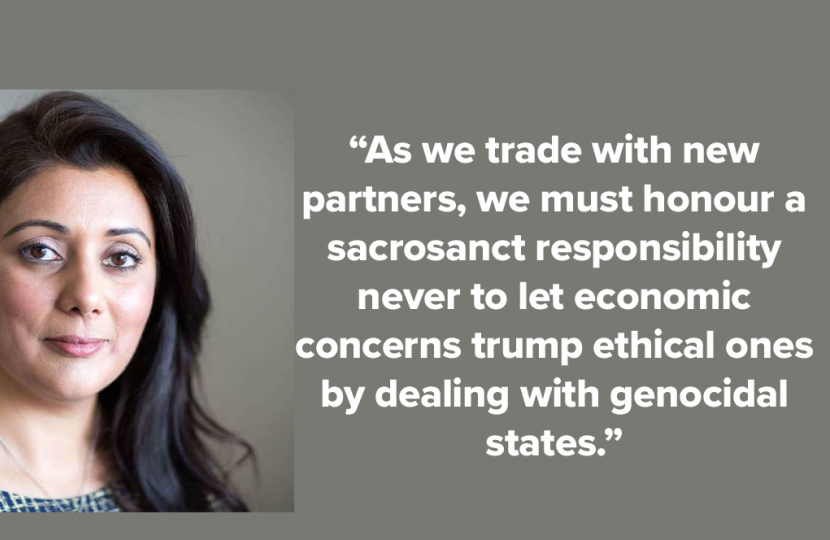 I led a political coalition to protect the amendment, comprising of every opposition party, major community organisations of most British faith communities, and the former leader of the Conservatives, Iain Duncan Smith. Although the motion was narrowly defeated, the scale of the rebellion showed that the Government could not ignore calls to deal with the issue of genocide trade.

I continue to lead the campaign and I have tabled a compromise amendment. Because the defeat was so narrow, the Hose of Lords will be emboldened to adopt an improved amendment - the Ghani Genocide Amendment, which will return to the House of Commons on 9 February.

View my speeches in Parliament:

I have written various articles on the topic for national media. You can read them by clicking on the links below:

Read the media coverage below:

Despite ominous calls for it to be cancelled, Nusrat Ghani, MP for Wealden, spoke at a University of Cambridge Union event discussing Xinjiang.

Sussex Express - Time to be on the right side of history

Read my March article in the Sussex Express, calling for adoption of the New Genocide Amendment and urgent action against the atrocities currently happening n Xinjiang, China.

Parliamentarians, human rights lawyers, World Uyghur Congress representatives and a Holocaust survivor came together at a Board of Deputies event, to call on MPs of all political parties to support the New Genocide Amendment to the Trade Bill, which would allow the UK High Court to make a prelimi

Please see below the articles I have written on the New Genocide Amendment and why Britain has an obligation to stand up against all tyrannical governments. All articles are also attached as PDFs at the bottom of this page.

Nus Ghani, MP for Wealden, has been leading the Genocide Amendment to the Trade Bill to ensure that the Government does not trade with genocidal states.

Read my article for the Times below or access it here.