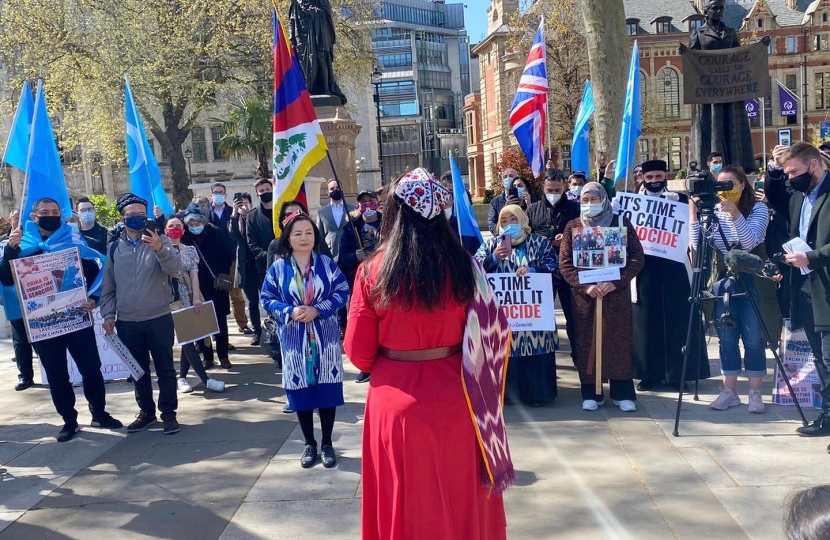 On Thursday 22 April 2021, The House of Commons unanimously passed my non-binding parliamentary motion declaring China's human rights abuses in Xinjiang as a genocide. Parliament saw evidence that all five markers for genocide are being met in Xinjiang, and now holds the view that an ongoing genocide is taking place. This is a huge victory and one that puts pressure on the Government. I am deeply grateful to all those who supported, helped and advised.

Please do read my article below, and a selection of the media coverage:

On 26th March this year, five MPs including myself were sanctioned by the Chinese Communist Party (CCP). It can be argued that these sanctions were an attempt to silence and intimidate us, to prevent us from raising the growing evidence of the abuse faced by the Uyghurs in Xinjiang. It will not work. My sanction followed my work on the Genocide Amendment to the Trade Bill, aimed at stopping the Government pursuing preferential trade agreements with countries committing genocide, and a Business, Energy and Industrial Strategy Committee Report that aimed to stop products tainted by slave labour and genocide appearing on our shelves. A senior academic was also sanctioned for sharing what she witnessed in Xinjiang, as was a legal chambers, a research group and two peers.

These sanctions have unmasked the CCP and are not only an attack on us as individuals but an attempt to stifle the free and open debate that is at the heart of our parliamentary democracy.

On the 27th of March, the Prime Minister said we are:

“performing a vital role shining a light on the gross human rights violations being perpetrated against Uyghur Muslims. Freedom to speak out in opposition to abuse is fundamental and I stand firmly with them.’

The Foreign Secretary added that:

“it speaks volumes that, while the UK joins the international community in sanctioning those responsible for human rights abuses, the Chinese government sanctions its critics.”

On Thursday 22nd April 2021, I will be leading a Backbench Business Debate to present the evidence of gross human rights abuses against the Uyghur. Given the mounting evidence of the situation in Xinjiang, China, I’m calling on Parliament to agree that the Uyghur and other ethnic minorities are facing genocide in the region, joining three of our allies who have done the same.

For decades, the CCP has waged war on the Uyghurs, an ethnic majority in the Xinjiang province. Under the banner of fighting terrorism, President Xi Jinping has dramatically accelerated this campaign, telling officials that they must “be harsh” and calling on the party to unleash the tools of “dictatorship”. China’s Foreign Ministry has painted the atrocities being committed against the Uyghur as “in essence about countering violent terrorism, radicalization and separatism.” [Spokesperson’s comments]

China has refuted claims that it is committing genocide in Xinjiang, although it has not yet allowed the UN Human Rights Commissioner unfettered access the region.

Genocide has been called the crime of all crimes. It has an internationally agreed definition, set out in Article II of the Convention on the Prevention and Punishment of the Crime of Genocide, which can be read in full here.

Article II states that genocide is: any of the following acts committed with intent to destroy, in whole or in part, a national, ethnical, racial or religious group, as such:

The UK position has always been that the government can only define an incident as a genocide if this has been determined in the International Criminal Court (ICC). The only way anything gets to the ICC is if the UN Security Council sends it there, and China and Russia have the power to veto anything the UN Security Council does. This means that, despite the Foreign Secretary stating in the House of Commons that “the scale and the severity of the human rights violations being perpetrated in Xinjiang against the Uyghur Muslims is now far-reaching, and it paints a truly harrowing picture”, the British Government is unable to declare genocide.

Fifty-one years ago the UK signed up to the UN Genocide Convention, designed to ensure that atrocities like those that happened during the Second World War could “never again” take place.

Yet since then at least half a million people were killed during the 1994 Rwandan genocide, 1.7 million people lost their lives in the Cambodian genocide and we have witnessed appalling atrocities by Daesh [Islamic State] against Christians, Yazidis and other ethnic and religious minorities in Iraq and Syria.

WHAT HAVE OTHER COUNTRIES DONE?

Over recent years, we have seen near incontrovertible evidence that there are mass atrocities taking place in the region. Three other countries have in some form declared the situation in Xinjiang to be that of genocide, while 30 countries have placed sanctions on CCP officials and organisations involved in Xinjiang. It is time we worked with our international colleagues on this issue.

On the 19th January 2021, then-US Secretary of State Mike Pompeo declared the situation in Xinjiang to be genocide. Pompeo stated that:

“I believe this genocide is ongoing, and that we are witnessing the systematic attempt to destroy Uyghurs by the Chinese party-state. The governing authorities of the second most economically, militarily, and politically powerful country on earth have made clear that they are engaged in the forced assimilation and eventual erasure of a vulnerable ethnic and religious minority group, even as they simultaneously assert their country as a global leader and attempt to remold the international system in their image”

This position was then confirmed by the new Secretary of State Anthony Blinken, who told reporters:

"But – my judgment remains that genocide was committed against – the Uyghurs and that – that hasn’t changed.”

On the 22nd February 2021, Canada’s Parliament voted by a motion to declare the situation in Xinjiang as genocide. The motion passed with 266 Yeas to 0 Nays.

The Dutch Parliament (called the States General) on the 25th February 2021 passed a non-binding motion declaring the treatment of the Uyghurs in Xinjiang amounts to genocide.

In May 2021, the Lithuanian Parliament passed a resolution recognizing that the Chinese government's human rights abuses against the Uyghurs constitute genocide

In June 2021, the Czech Senate unanimously passed a motion condemning the abuses against the Uyghurs as both genocide and crimes against humanity.

WHAT EVIDENCE DO WE HAVE TO DECLARE GENOCIDE IN XINJIANG?

Significant reports, witness testament, satellite imagery and Chinese local government data point to various markers from the UN’s Genocide definition being met in Xinjiang. This is the largest incarceration of a minority since the Second World War. As the Foreign Secretary noted in his statement on Xinjiang in January this year, we have:

Act One: Killing members of the group

Uyghurs have been killed in significant numbers in Xinjiang for over a decade as part of the CCP’s heavy-handed ‘counterterrorism’ efforts. There have been reports of killings from within the camps across Xinjiang.

Act Two: Causing serious bodily or mental harm to members of the group

Reports began emerging from Xinjiang survivors of grievous bodily and mental harm a couple of years ago. Torture is reportedly widespread.

Act three: Deliberately inflicting on the group conditions of life calculated to bring about its physical destruction in whole or in part

The culmination of activity against the Uyghurs in Xinjiang is a deliberate and calculated attempt to bring about its physical destruction.

There have been significant and widespread reports of forced sterilisation in the Xinjiang region, supported by the Chinese Government’s own data.

Act five: Forcibly transferring children of the group to another group

Human rights groups, journalists and survivors have produced first-hand reports of the separation of Uyghur children from their parents at the hand of the CCP.

I was delighted to participate and present at the annual Magnitsky Awards in London.

Ms Ghani has been shortlisted alongside the winner, speaker of the United States House of Representatives, Nancy Pelosi.

Wealden MP Nusrat Ghani has been shortlisted for the 2021 NATO Parliamentary Assembly Women for Peace and Security award, alongside the winner, the Honourable Nancy Pelosi, Speaker of the United States House of Representatives.

Nusrat Ghani, MP for Wealden, was a panel guest for a Bright Blue event during Conservative Party Conference.

Global Britain needs a proper framework for dealing with China

As China returns to its position as a world superpower, liberal democracies are finally stirring from years of passivity and forming a harder line on President Xi Jinping’s China, and new partnerships and alliances are springing up.

Nusrat Ghani, MP for Wealden, spoke at an Atlantic Council event on the theme of Europe’s response to the Uyghur genocide.

China's ambassador to the UK has been told he cannot come to Parliament while sanctions remain in place against a number of MPs and peers.

Nusrat Ghani attends event on the Xinjiang Crisis and Genocide

Despite ominous calls for it to be cancelled, Nusrat Ghani, MP for Wealden, spoke at a University of Cambridge Union event discussing Xinjiang.