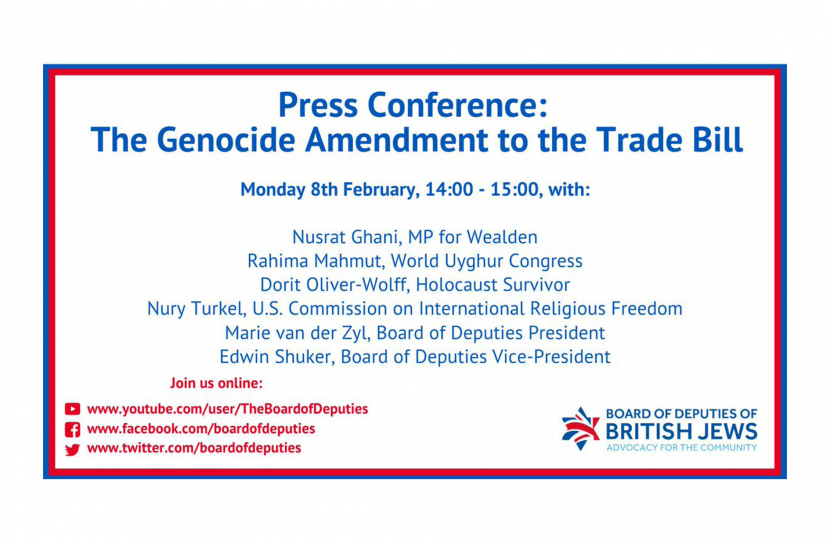 Parliamentarians, human rights lawyers, World Uyghur Congress representatives and a Holocaust survivor came together at a Board of Deputies event, to call on MPs of all political parties to support the New Genocide Amendment to the Trade Bill, which would allow the UK High Court to make a preliminary determination whether a state is carrying out a genocide.

The event was chaired by the Board of Deputies President Marie van der Zyl and included a panel of speakers including, Dorit Oliver-Wolff, Holocaust Survivor; and Rahima Mahmut, Uyghur human rights activist. As part of the panel, Nus spoke in support of the amendment alongside parliamentary colleagues Lord Alton of Liverpool and Ian Blackford, SNP Westminster Leader.

Nus Ghani said: “Last week, on Holocaust Memorial Day, the Board of Deputies of British Jews said that the persecution of the Uighurs by China was chillingly similar to the treatment of Jews by Nazi Germany. Today we heard a heart-breaking testimony from Dorit Oliver-Wolff, a Holocaust survivor, whose freedom has been taken away simply for being born Jewish. In the 75 years since the Nuremberg Trials, the UK and the UN have never been able to act in the face of an ongoing genocide. This Amendment would at last change that.”

“The Government’s policy on genocide is that it is a ‘judicial matter’. The New Genocide Amendment allows our respected UK courts to make a preliminary determination on genocide, so that parliamentarians can then debate what needs to happen next in terms of who we trade with. It will expose and prevent genocide and ensure Britain is never complicit in trading with genocidal regimes. I know that my Wealden constituents would not want to buy products that they knew were produced on the back of slave labour and genocide. The New Genocide Amendment provides an opportunity for Britain to lead the world in standing up to tyrannical, genocidal regimes and add meaning to the words ‘Never Again’.”

The video of the full event can be found here.