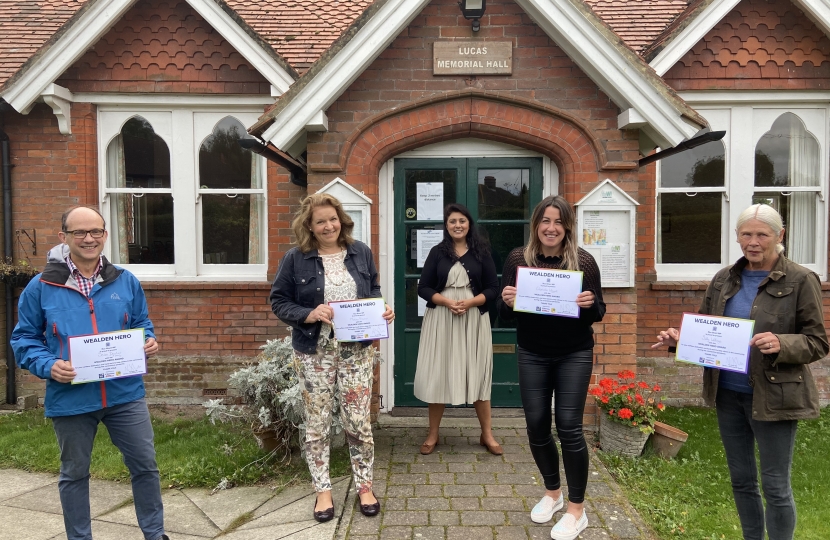 I am delighted to announce that Sean Dexter and a team of Waldron volunteers have been awarded the Wealden Hero Award this week.

At the beginning of the pandemic, Sean and his family began to map out elderly and vulnerable residents of Waldron and the surrounding area, to identify those who were at risk and needed support. He mobilised a group of volunteers, who were readily available for the duration of lockdown and helped by picking up prescriptions, doing the shopping and running small errands. Together with Charlotte Waggott, Sean set up ‘Waldron Retail Support’ and liaised with retailers in neighbouring Heathfield to ensure that a delivery system was put in place. He and his team of volunteers collated, collected and delivered orders, which were distributed from the Village Hall to those confined at home during lockdown. Special thanks go to the whole volunteer group: Mobbs Pitcher, Charlotte Waggott, Sally Wellings, Ian Dixon, Ella and Sue Hinton, Karin and Imogen Taylor, Catherine Long, Emilia Dexter and Min Peterken.

Sean and his team of volunteers have been a lifesaver for shielding and vulnerable in the Waldron community and they have done an amazing job in keeping Waldron fully supplied during lockdown and beyond. Well done!

In July 2020, I launched the ‘Wealden Hero Award’ to extend my thanks and gratitude for the efforts of Wealden residents to overcome the many challenges posed by the Covid-19 pandemic, and to celebrate the many acts of kindness and community spirit throughout the crisis. I know that there are man