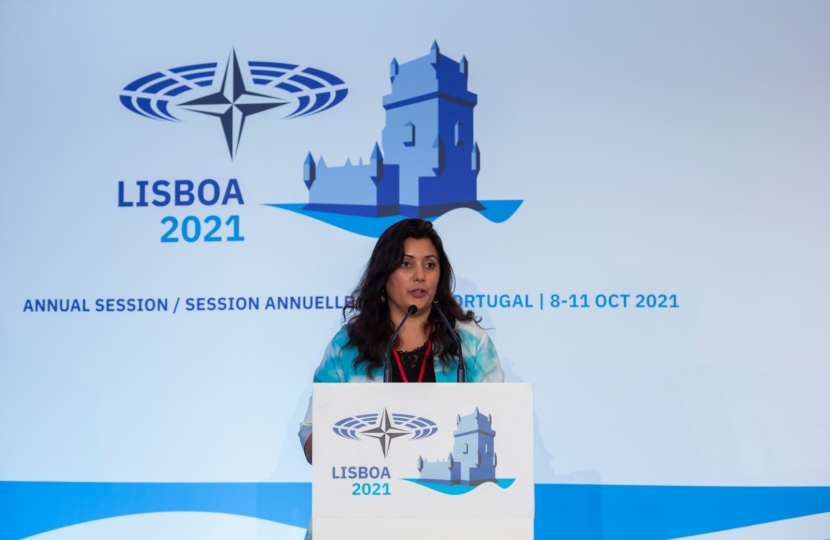 Thank you kindly for letting me speak to you today.

This is my first in-person session with the Assembly, so I am very happy to see you all face-to-face for the first time. Likewise, a warm welcome to those of you who are attending virtually. I hope we will be able to meet in person sometime soon.

By way of an outline, I wanted to first go over the motivation behind this report before very briefly going over some of the additions that were made following our online Spring Session in May.

After that, I will move on to a broader discussion about science and tech cooperation and why I think this topic will become even more important in the future.

The tectonic plates of the international security environment are shifting rapidly. There are a number of reasons for this, but I think two factors stand out more than any other.

The first factor is the rapid advance of technology.

Today, we are experiencing an era of intense and global technological change, where emerging and disruptive technologies like Artificial Intelligence are already radically changing the way our societies, economies, and militaries function.

Still, the exact impact of these technologies remains unclear at this point.

In short, they could bring enormous benefits to global society, but they could also raise uncertainty and lead countries towards mistrust, accidents, and even escalation.

However, the international security environment is also shifting due to the rise of China.

In the past decade we have witnessed the rise of a great power that is increasingly aggressive and expansionist, one that actively looks to redress the rules based international order in ways that are harmful both to our values and to international security more broadly.

At the gravitational centre of these two factors are our Asian partners, Japan and the Republic of Korea.

These countries are not only science and technology leaders on the world stage and at the forefront of global innovation, they are also critical players on the regional security frontlines when it comes to China’s increasingly aggressive foreign policy.

It makes sense, then, that we should partner with both countries, as we share not only the same strategic interests – namely a free, open, and peaceful Asia Pacific – but also the same values,  like democracy and individual freedom.

Indeed, maintaining the Alliance’s long-term technological superiority is critical for our continued security, especially in an age where, on the one hand, technology is advancing in rapid and uncertain ways, and, on the other hand, where a rising China is looking to leapfrog our technological capabilities.

It is clearly logical, then, that expanding our science and technology cooperation with our Asian partners would benefit not only both of our technological capabilities, but also bolster peace and stability in the Asia-Pacific region.

When updating of this report, then, I really wanted to drill down on the science and technology strategies of both Japan and Korea and get a more complete picture of where they are each headed in terms of technological innovation.

Since we don’t have a great deal of time, I thought I could mention some notable highlights from the updating process here.

First, the report has significantly more information on Japan’s efforts to develop autonomous systems, advanced space technologies, and Artificial Intelligence. Likewise, I also expanded on some of the advances they have made in military technologies like hypersonic missiles, stealth aviation technology, and advanced materials. Indeed, the Japanese military has been very active in pursuing game changing technologies and recently proposed an expanded R&D budget for next year that is more than one and a half times bigger than last year’s.

One area, that I would like to highlight in particular, though, is Japan’s impressive capabilities in advanced maritime technologies. As some of you may know, this is a topic that is particularly important for me. I was Parliamentary Under Secretary of State for Transport in the United Kingdom, where I had significant responsibilities for the UK’s maritime affairs. In any case, I also think that maritime technology issues are of particular importance for Asian-Pacific security, considering China’s aggressive maritime activities in the South China Sea and the Taiwan Straits.

Specifically, Japan has emerged as a world leader in the automation of ships, known as “robo-ships.” Meanwhile, their military technology specialists are also exploring technologies like unmanned underwater vehicles (or UUVs), which could be a truly revolutionary capability in global maritime security – especially in the Asia Pacific.

I also further explored the technology and innovation efforts taking place in the Republic of Korea. Like Japan, Korea is working on a number of dual-use technologies like Artificial Intelligence and 5G communications technology.

One area that I would like to highlight, though, is Korea’s major role in the global semiconductor industry. As many of you may know, semiconductors, or “chips,” are at the heart of all advanced electronics that we use today. Our militaries and the global economy need advanced chips to function, and their design and manufacture is at the very cutting edge of global technological change today.

Importantly, the global supply chain for semiconductors is highly diversified, meaning that different phases of chip production are spread around the world. These different phases include, for example, their design, which is done with computer programs, and their physical manufacturing, which is done through industrial plants known as foundries. Korea is perhaps the only country that excels at every phase of the chip supply chain. Most importantly, Korea is one of only two countries – the other being Taiwan – that possess the most cutting-edge chip manufacturing – or foundry – techniques, making them a lynchpin of the global economy.

So, there are clearly a number of critical technology areas where we can expand our cooperation with Japan and Korea. There is an incredible potential in this partnership – and it serves both NATO Allies and our Asian partners. The important point this report makes is that cooperation in science and technology is a vastly underappreciated area of NATO partnerships. It is a win-win for everyone involved and we should do everything to promote it.

Over the summer I also took the time to think more carefully about how we might improve the quality of our science and technology cooperation moving forward. Obviously, this would be to make changes to our own Allied networks and would look to accommodate our Asian partners in whatever way they would like to pursue our cooperative relationship.

After conversations with specialists at the NATO STO and elsewhere, one area that is very promising is devising strategies to encourage greater participation by younger scientists. Over the past few decades, the scientists that work with the NATO collaborative network have steadily increased in age, which raises several concerns.

An obvious one is that we are missing out on the best new ideas that are brewing amongst younger NATO citizens. When we think of innovation and the most cutting-edge technologies, we often think of younger scientists and engineers working for start-ups. We as Allies have to find a way to harness that abundant talent and convince them that working for NATO is a really exciting and honourable proposition.

Similarly, I also think that we have a great deal of progress left to make on the inclusion of women and girls in the STEM fields, that is, Science, Technology, Engineering, and Medicine. By NATO’s own estimate, women account for less than 30 percent of researchers world-wide, and, in some sectors like information communications, less than 5 percent. Those disparities deprive us as societies of an enormous supply of diverse perspectives, creativity, and innovation and necessarily prevents us Allies from reaching our full science and technology potential.

I would also note that there are multiple ways that we could bridge both the age gap and the gender gap, some of which I highlight in the recommendations section of the report. These include expanding thematically focused networks for young people as well as women and girls.

In conclusion, I want to thank you all for listening to this speech. I look forward to your thoughts and questions.

Before ceding the floor I would like to thank the Japanese delegation for their excellent cooperation in putting this report together. Moreover, this report would not have been possible without the support provided by the Office of the NATO Chief Scientist and the NATO Collaboration Support Office. I am thankful for their excellent input.  Finally, I want to express my thanks to our research assistants, particularly Pierre de Dreuzy, for their assistance in producing this report.

Thank you all once again.