Nusrat Ghani supports campaign to get schools back to normal 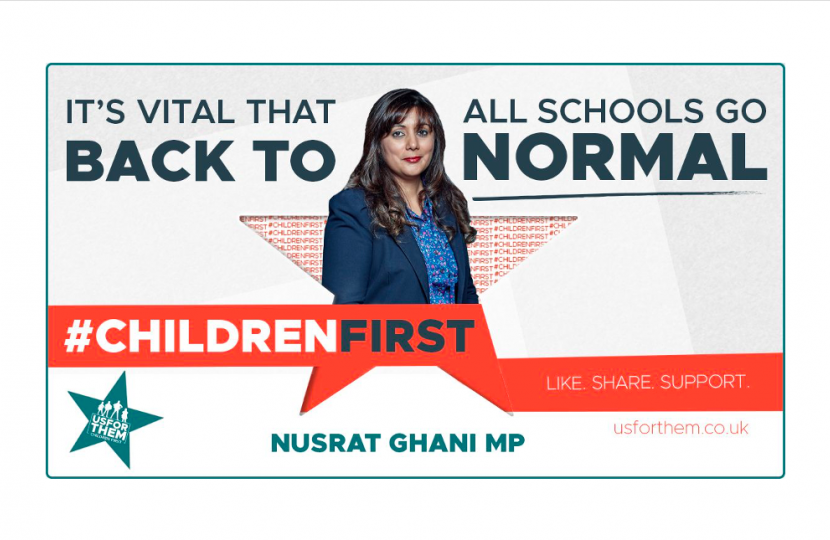 Nusrat Ghani, MP for Wealden, has added her voice to the 'UsForThem' campaign to get schools back to normal. Set up in May 2020 in response to the first wave of closures of schools across the UK, re-opening schools remains the primary campaign.

Nusrat signed a letter to the Prime Minister which reads:

The United Kingdom’s vaccination programme has been a huge success and the NHS, you and your Government deserve the country’s thanks. Children have sacrificed so much to keep the country safe during the pandemic. They have lost physical fitness, suffered mental health damage, and experienced catastrophic learning loss. This generation of schoolchildren have already missed over 1 billion school days and almost 100,000 children have failed to return to education full time. So it is vital that all schools go back to normal from 19th July when restrictions lift, even if just for the last few days of term. This will send an important signal ahead of the Autumn that the route to freedom is a “one way road” and genuinely “irreversible”.

First, guidance on self-isolation is causing unnecessary and significant disruptions to the education of hundreds of thousands of children. Recent Department for Education figures show that last week a quarter of a million children were forced out of the classroom, being required to self-isolate despite most displaying no symptoms of Covid19. Up to 270 pupils at a time are being affected by one instance of a positive test result. This disproportionate policy is unsustainable and is causing deep uncertainty and anxiety among a cohort who have already suffered enough.

Second, restrictions such as bubbles in schools are causing ongoing and severe disruption and preventing schools from operating normally and being able to offer the full array of extra curriculum activities and sports which are so vital for children's health. Sports days are being cancelled and children are missing out on end of term music concerts, performances, proms, and many other things which normally enrich education. You have said you want to “restore Britain’s place as a scientific superpower”. We cannot hope to accomplish this worthwhile aim whilst these bubbles prevent pupils from getting into the school science labs and engaging with crucial STEM subjects.

Finally, a child’s ability to receive an education must not be linked to the vaccination status of either individual children or the cohort as a whole. Chris Whitty recently indicated that, unless vaccinated, children could suffer “disruptions” to their education, whilst the Health Secretary said that child vaccinations will create “big upsides” for children’s education. This treats education as a disposable luxury when it is a fundamental right. No child should be denied access to the classroom on the basis of vaccination status and neither they nor their parents should be put under unwanted pressure to take medicines they do not wish to take. The JCVI must be allowed to make its determination free from political interference, and whatever the JCVI decides, ministers must make clear that a parent’s right to determine what is in the best interests of their children must never be taken away.

Having delivered such a world-beating vaccination programme at home and having protected the most vulnerable in this country, it is time for Global Britain to take a lead in protecting front-line workers, the elderly and the most vulnerable in some of the poorest parts of the world. Delivering on your ambitious G7 agenda to vaccinate those that need them most around the world by the end of 2022 must now become our priority, not selfishly hoarding vaccines for parts of our population who don’t need it. We urge you to now grasp this opportunity to prioritise children as a matter of urgency. Children need normality, security and certainty. If we are to have a hope of levelling up and building back better, we must restore childrens’ school lives to normal so they can recover their health, wellbeing, education and their futures.

The campaign has received support the Telegraph, the BBC, and the Daily Mail.