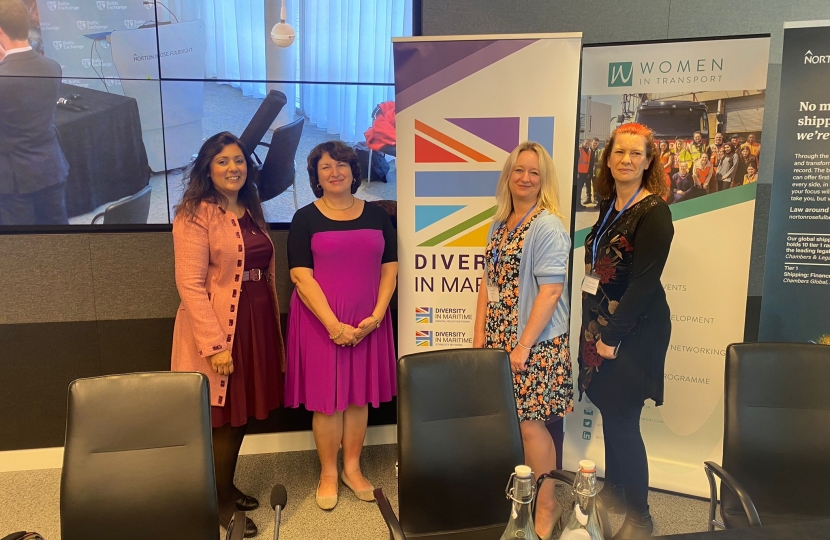 Nusrat Ghani, MP for Wealden, attended a Maritime UK Women's Summit at Norton Rose Fulbright and gave a speech highlighting the critical need to champion diversity in the sector and across industries at large. She spoke alongside Liz Moscrop, who chairs Women in Aviation International, Adeline Ginn, chair of Women in Rail, Sonya Byers, CEO of Women in Transport and Sue Terpilowski, founding Chair of the Women in Maritime Network.

Throughout her career, in and out of Parliament, Nusrat has made it her priority to encourage women and girls from all backgrounds to get into careers they may have viewed as being for 'boys', such as politics and engineering.

In her speech, Nus outlined her view on the two major reasons for diverse hiring. Diversity is not a side issue; it's fundamentally, economically and morally an issue of success or failure. There are two reasons for this. First, diversity leads to more creative thinking and reduces the risks of groupthink and bias, which leads to better economic outcomes. Second, it is the right thing to do, reflecting our diverse society and progressive ambitions as a country. McKinsey recently found that companies with more than 30% women executives were more likely to outperform companies where this percentage ranged from 10 to 30, and in turn these companies were more likely to outperform those with even fewer women executives, or none at all. A Harvard School of Public Health study found companies with the highest number of female directors on their boards had a 42% greater return on sales. Separately, the CFA Institute found companies lacking board diversity tend to suffer more governance-related controversies than average. The economic argument is there.

She then recounted the work she had done as Maritime Minister, launching the Women in Maritime Pledge, landing the world’s first Transport and Accessibility programme, securing significant funding for the Maritime and Me campaign, and overseeing Europe’s largest rail construction project HS2 making sure Government was encouraging women and girls to take up engineering and design jobs in rail and road. As a Minister for the Year of Engineering, she ensured that Government focussed on young girls, especially those from deprived backgrounds, making sure they were encouraged to consider careers in rail, road, aviation and maritime. She exceeded her goal and reached over a million young people.

Nusrat concluded by saying that we need more women to consider jobs across transport from design to engineering & firms opening up recruitment, retention & promotion to women.