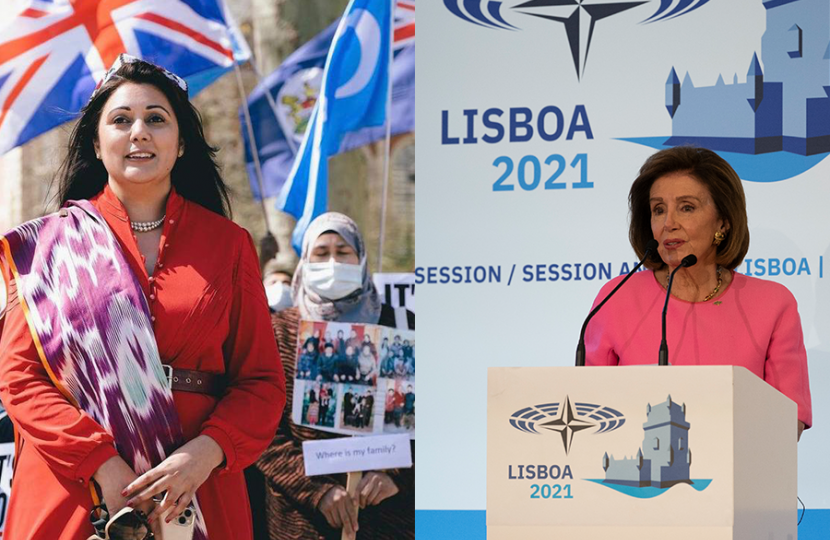 Nusrat Ghani, MP for Wealden, was amongst six women shortlisted for the 2021 NATO Parliamentary Assembly "Women for Peace and Security" Award, alongside the winner, Speaker of the United States House of Representatives, the Honourable Nancy Pelosi.

The “Women for Peace and Security” Award was set up to honour a woman who has made a particular contribution to the equal participation of women and men in the field of peace and security, the protection of women in conflict situations and/or the mainstreaming of women's needs and perspectives into relief and recovery initiatives in post-conflict countries.

Nusrat was nominated for her work leading the UK Parliamentary action against the gross human rights abuses, forced sterilisation and state-orchestrated torture and rape of Uyghur women in Xinjiang, China. Because of this work, Nusrat was sanctioned by the Chinese Communist Party at the end of March 2021. However, far from being intimidated into silence, Nusrat campaigned even harder for Uyghur rights. This culminated in an unprecedented debate in which the UK Parliament unanimously declared an ongoing genocide for the first time in its history, triggering similar action in parliaments around the globe.

Nusrat Ghani said: “Speaker Pelosi has advanced gender equality initiatives both domestically and abroad, raised the plight of women in conflict and urged women around the globe to know their power. I’m proud and deeply honoured to be one of six women shortlisted for the NATO Women for Peace and Security Award alongside her. I have been continuously calling for the protection of women in conflict situations and highlighting the need to reflect women's needs and perspectives into relief and recovery initiatives. I have been highlighting the impact of the withdrawal from Afghanistan on women and girls and fight for their safe passage out of the country, and calling out the torture and forced sterilisation of Uyghur women by the Chinese Communist Party. I am proud that NATO has recognised my work and longstanding commitment to fighting for women and girls worldwide and I will continue my efforts in this direction.”