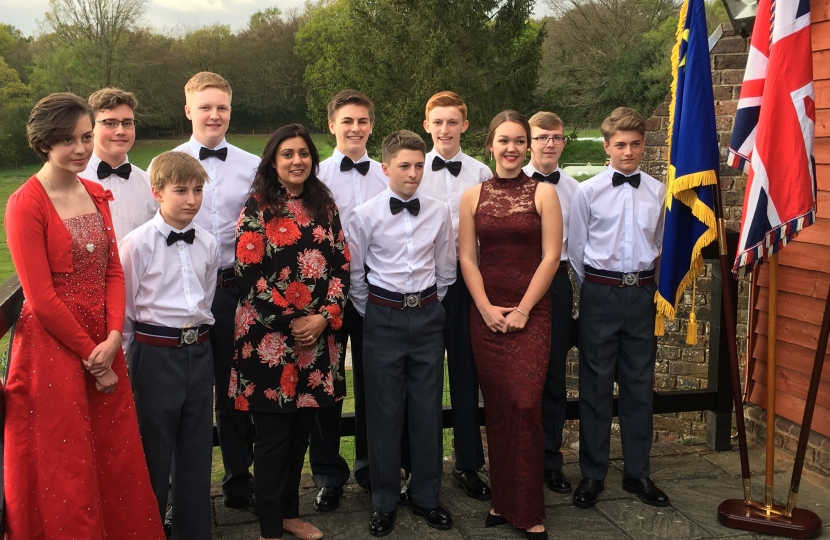 The 1414 (Crowborough) Squadron Dining In Night took place this weekend in Crowborough, where the Air Cadets were joined by their Squadron President Nus Ghani MP.

The cadets have all passed classifications, first aid and radio communications qualifications, two cadets now have their Bronze Duke of Edinburgh’s Award and staff numbers have increased to enable the Squadron to offer expertise in disciplines such as modelling, fieldcraft and weapons training. Towards the end of last year, the Cadets raised a record breaking £1,845.04 for the Royal British Legion as part of the Poppy Appeal.

At the Squadron’s annual Dining In Night, held last Saturday 22 April, Nus Ghani gave a speech on the value of volunteering in the community. Speeches were also given by dignitaries including the Crowborough Branch Chairman of the Royal British Legion and the Squadron Leader, before a raffle.

Nus Ghani, Member of Parliament for Wealden and President of the Squadron, said: “The Crowborough Cadets represent the very best of voluntary organisations. They give the young people of Crowborough vital skills for the future, and a range of opportunities they would not get elsewhere. It is a privilege to be their President.”

Warrant Officer Mark Hobbs ATC, Officer Commanding, said: “The Squadron was delighted to have Nus among our many honoured guests supporting the work of the cadets and the adult volunteers, and celebrating the Squadron's many successes of the last year.”