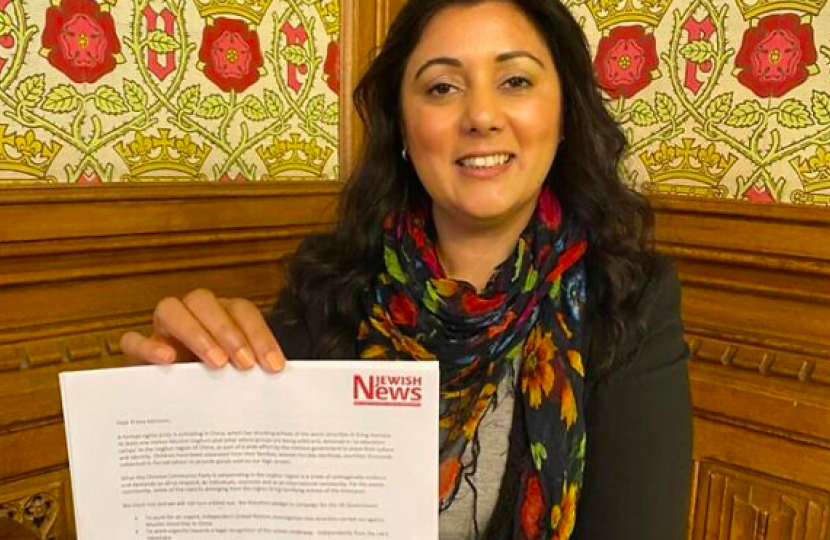 World Jewish Relief, the humanitarian agency of the British Jewish community and one of Britain’s biggest Jewish charities has today launched a Uyghur Refugee Emergency Appeal, with the intention to provide food packages, healthcare and psychological support to approximately 6,000 Uyghur families in and around Istanbul. World Jewish Relief said over 11,000 Uyghurs had risked a hazardous journey to reach Turkey but were now stranded without food or the right to work. Many now fear being deported back to China, where they risk internment.

The campaign is supported by the Board of Deputies of British Jews and the Jewish News, with both of whom Nus is closely collaborating on raising awareness about the plight of the Uyghur. Donations to the WJR Uyghur Refugee Urgent Appeal can be made at www.worldjewishrelief.org/uyghur.

Nus Ghani said: “This is a timely initiative from World Jewish Relief, supported by Jewish News and The Board of Deputies, both of whom have campaigned powerfully on the situation facing the Uyghur. Their plight is one of the most desperate in our world today. The Uyghur Refugee Emergency Appeal will make a significant and meaningful difference for 6,000 families who have fled oppression in Xinjiang and now reside in Turkey. It deserves our full support.”