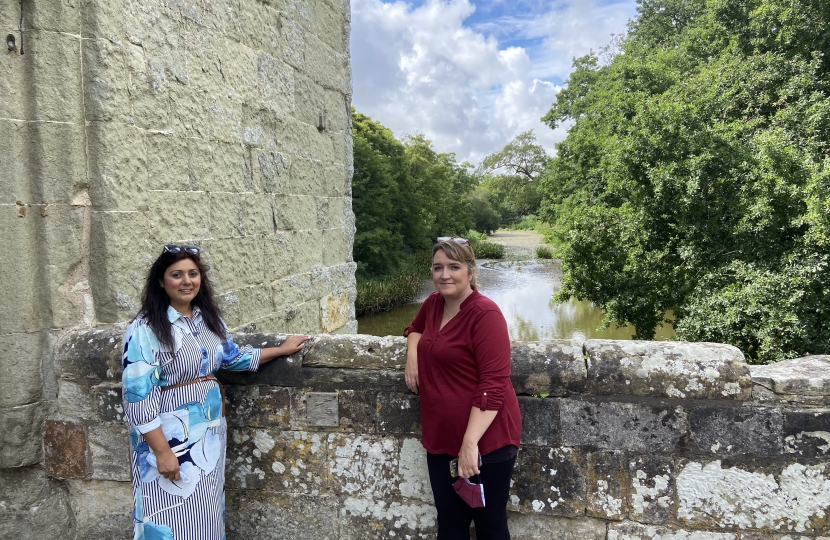 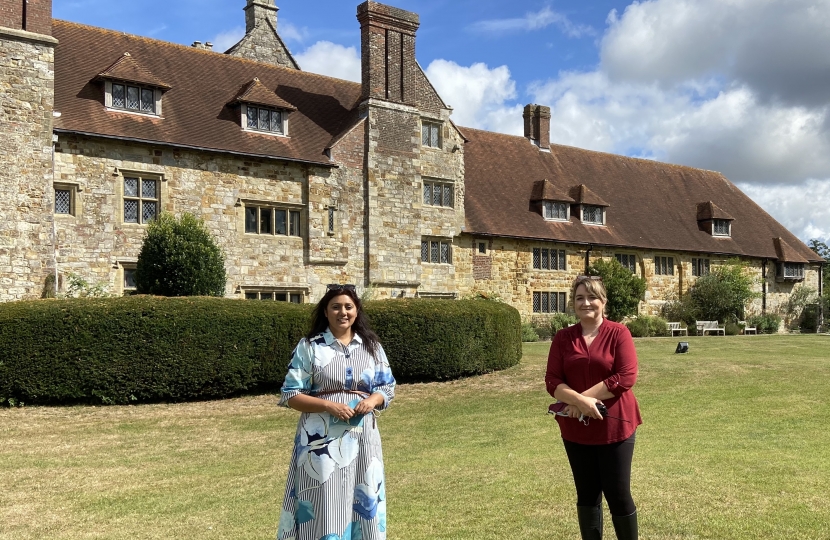 Nus Ghani, MP for Wealden, has visited Michelham Priory to support its 175th birthday fundraiser and to learn more about the issues surrounding its unique moat.

Michelham Priory is situated in the beautiful countryside of Upper Dicker, near Hailsham. It is a Grade I listed building, which became a country house in the 1930s and was home to evacuees and troops during WWII. It is currently run by Sussex Archaeological Society, which also cares for Lewes Castle, Anne of Cleves House, and other properties across Sussex.

Michelham Priory boasts Britain’s longest continual medieval water-filled moat, which stretches a mile and encircles its site. However, due to gradual silt deposition and increasing invasive growth of aquatic plants, the moat has been deteriorating. The loss of available water in the moat has archaeological and environmental ramifications. It has also made the watermill, which has stood on the site since at least early fifteenth century, inoperable. Large amounts of vegetation were removed in 2013 and 2014 to prevent an environmental crisis, but the fundamental problem remains. The moat has to be de-silted imminently or it will be completely lost.

Nus is committed to raising the issue with the Minister for Sports, Heritage and Tourism and with the Environment Agency, to address the significant conservation and maintenance needs at the site.

Michelham Priory and its gardens are now open to visitors, seven days a week. To find out more, please visit: www.sussexpast.co.uk.

As it is the Society’s 175th birthday in June 2021, they have launched the Celebrating 175 Fund. If you can, please help them recover the revenues that are key to their survival and support the appeal here: www.totalgiving.co.uk/appeal/Celebrating175.

Nus Ghani said: “Michelham Priory is a wonderful piece of history and I am proud that Wealden is the home of the UK’s longest medieval water-filled moat. It is absolutely vital that the moat is restored and the watermill operational again. I fully support the Michelham Priory moat restoration project and will raise the issue with the Minister for Sports, Heritage and Tourism and with the Environment Agency.”

“Sussex Archaeological Society plays a vital role in preserving the rich history of Sussex and in driving forward archaeological research in the region. Despite the devastating impact of Covid-19, the historical sites are a vital part of the cultural fabric of Sussex and local economy. The Society’s 175th anniversary is the perfect opportunity to celebrate its achievements and help it to continue to champion the area’s cultural heritage for many years to come.”

Michelham Priory is situated in the beautiful countryside of Upper Dicker, near Hailsham. It is a Grade I listed building, which became a country house in the 1930s and was home to evacuees and troops during WWII.