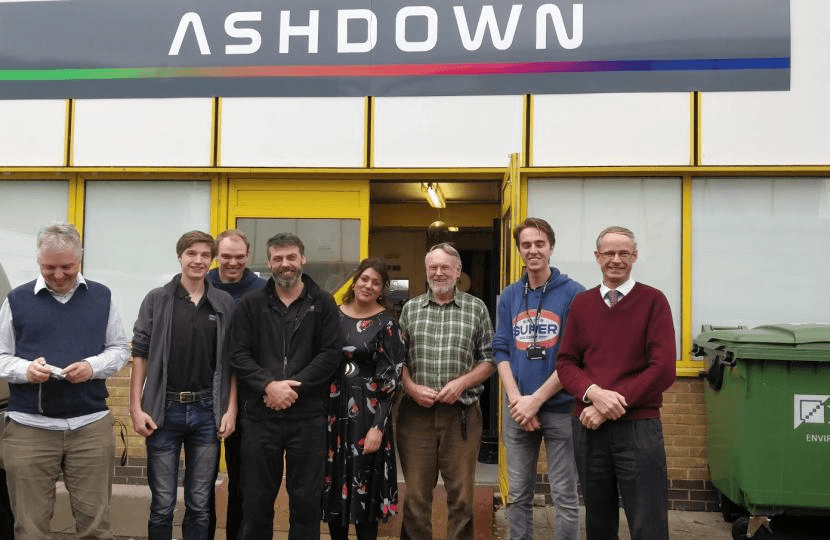 Speaking to an audience of Ministers, MPs, engineering professionals, and school children, at a reception in Parliament, Nusrat Ghani, MP for Wealden, reflected on the success of the Year of Engineering.

Nus, as part of her role as a Minister in the Department of Transport, is Minister for the Year of Engineering.

The event celebrated the achievements of the Year of Engineering, thanked partners and supporters, and set out a vision for the legacy campaign: ‘Engineering: Take A Closer Look’.

Engineering is a career close to home for many in Wealden, with major firms based in the constituency.

Several have won Queen’s Awards for Enterprise, including Aspen Pumps, and Scientifica, in Uckfield. TR Fastenings, also Uckfield-based, have won a significant number of awards in the automotive industry for their innovative designs.

The Year of Engineering 2018 was a year-long, cross-government campaign aimed at raising the profile of engineering amongst 7 to 16 year olds, and widening the pool of young people that would consider a career in engineering.

Engineering is undervalued and misunderstood – only a third of parents know what people in engineering do.

There is a significant lack of diversity within the industry. Only 12% of the engineering workforce is female. People from ethnic minority groups account for 8% of those employed as professional engineers compared with 12% across the working population.

The Year of Engineering – and going forward the legacy campaign – aims to increase the desirability of engineering as a career by increasing awareness and understanding amongst young people, their families, and their teachers, of what engineers do.

“The Year of Engineering has been a vital part of the government’s strategy to improve links between industry and young people, to ensure the next generation are inspired to take full advantage of the 4th Industrial Revolution.

“It was wonderful to meet young people at this event who so clearly have been motivated to consider engineering as a profession. I am thrilled too that Uckfield-based Ashdown AV, a firm local to me, played their role in the Year of Engineering also, focussing on ensuring top-quality apprenticeships for the next generation.

“I was also delighted to hear that as I spoke, BAE Systems were with young people at Hailsham Community College, opening their eyes to the next generation of British-based engineering that is keeping the world safe, and people connected to one another.

“Given the number of award-winning STEM firms in the Constituency, it is more important than ever that local young people engage with the possibility of a STEM career, to ensure that these companies can stay local, can keep contributing to the economy, and that local families will always be the beneficiary of their world-leading work.

“The Year of Engineering has been a great success, with over one million young people given a chance to engage with the STEM sector in the UK.

“I am certain that our next campaign, Engineering: Take A Closer Look, will bring STEM Education and outreach back to Wealden once again, sparking curiosity in the minds of our young people, as The Year Of Engineering has”.

Nus Ghani, MP for Wealden, is encouraging Wealden residents to visit local establishments to enjoy the Eat Out to Help Out Scheme, which is now live.