Stockpiling is not necessary, as supermarkets are well stocked to feed and provide basic products to their clients.

Some people, however, have ignored the advice from the Government and major food retailers.

Therefore, a number of supermarket chains have had to impose strict shopping measures.

Sainsbury's customers will only be able to buy a maximum of three of any grocery products and a maximum of two on the most popular items, such as toilet roll, soap and UHT milk, from Wednesday March 17.

Stores across the country now offer the first shopping hour exclusively for elderly and vulnerable customers. Sainsbury's will also be updating their online shopping availability, and from March 23 they will be adding priority access to online delivery slots for customers aged over 70, or those who have a disability.

Tesco recently announced that the opening hours of its 24-hour stores had been changed from 6am to 10pm, with restrictions on a number of basic items.

Asda is restricting all items to a maximum of three per customer across all food items, toiletries and cleaning products, from Thursday 18 March. Shops operate a dedicated hour on Mondays, Wednesdays and Fridays between 8am – 9am for NHS workers, the elderly, and vulnerable individuals. They will be given priority over other customers. Asda’s 24-hour stores are now being closed every day for six hours from 12am to 6am, so as to allow staff time to restock supplies.

Lidl is yet to implement any item restrictions, but as part of a joint statement released earlier this week with other supermarkets, they have called on customers to be “considerate” in the way they shop.

From Friday 20 March, the opening times for Aldi supermarkets were changed to close slightly earlier, from 8am to 8pm.

Its opening hours on Sundays have remained the same, from 10am to 4pm and until 6pm in Scotland.

Waitrose, which is part of John Lewis Partnership, has announced a three-item limit on certain products and a limit of two packets of toilet roll. The retail group said it is also launching a protected shopping period for the elderly and vulnerable at Waitrose, which will be each store's first opening hour from Friday. Waitrose cafes and rotisseries will be temporarily shut to help stores cope with increased demand in other areas.

Iceland are not currently restricting items per customer, but have urged people to shop in an appropriate way for the needs of your family and considering other customers when selecting products in our stores, and we would ask you to be considerate towards our colleagues.

Iceland stores will dedicate the first two hours of trading for elderly and vulnerable customers, allowing them to buy supplies when it is quieter.

Morrisons will be recruiting around 2,500 pickers and drivers, as well as 1,000 staff in its distribution centres to expand its online shopping services.

It will make more slots available and also set up a call centre for those without access to online shopping, such as the elderly.

On Tuesday 24 March, the Co-op announced that the majority of its stores will now close at 8pm, to give staff time to re-stock and clean.

Transport Secretary Grant Shapps has authorised a temporary relaxation, until April 16, of the drivers' hours rules to help deliver goods to stores across the country.

A Department for Transport statement said the relaxation applies only to drivers supplying food and essential products to supermarkets.

Stores have also reassured customers they are doing all they can to ensure their shelves remain full and their supply chains running smoothly.

These measures are necessary to make sure that stocks can be replenished in good time and that supply chains function normally. They are not related to any type of shortage.

Where possible, please consider shopping at smaller outlets, as they are seeing smaller numbers of shoppers than major chain shops. 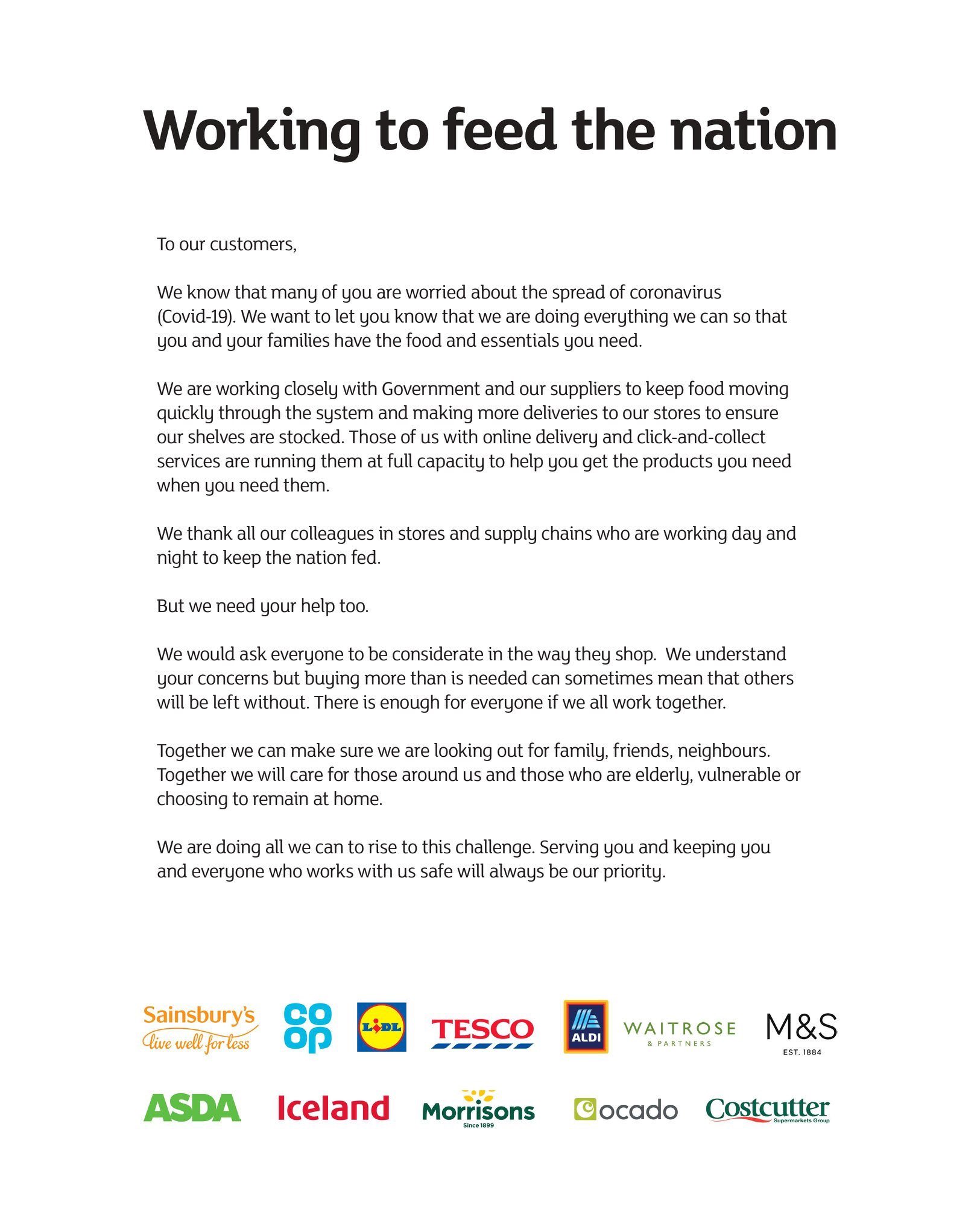