Why won’t the government call out China’s genocide against the Uighurs? 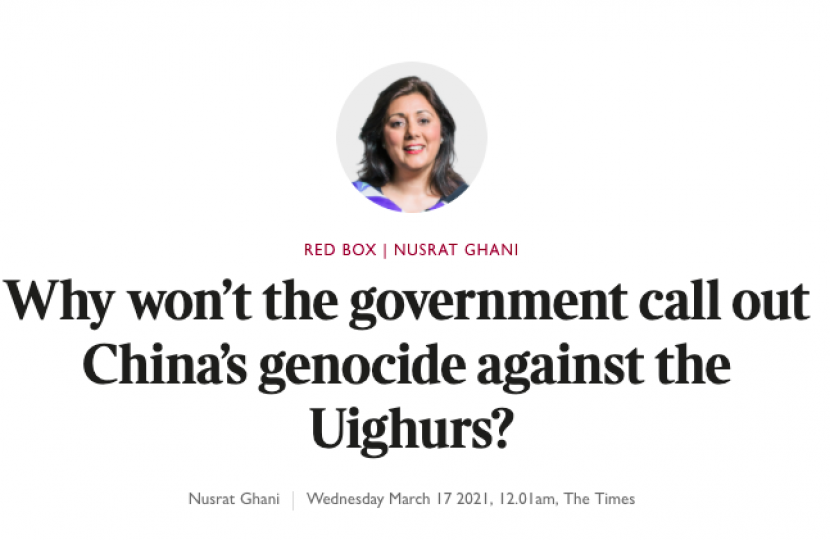 The West is at last awakening to the horrors that are being perpetrated against the two million Uighurs and other minorities in China.

Canada’s House of Commons last month voted by 266 to 0 to declare a genocide. In the same week, the Dutch parliament became the first European legislature to do the same. And Donald Trump, during his last days as president, determined that China had committed “genocide and crimes against humanity”.

There is no doubt that the forced labour in prison camps in Xinjiang’s cotton fields, the state organised violation and abuse of women, and forced sterilisations is anything other than a genocide. There is also no doubt that the UK government is being slow to make the decision to stand shoulder to shoulder with our allies. But we can still make a difference and both government and businesses have an important role to play.

In recent weeks, the business, energy and industrial strategy select committee has heard from dozens of businesses about the steps they take to check on their operations in Xinjiang. While many businesses at least attempt to do the right thing, certain companies did not have systems in place to ensure that forced labour was not part of their business model.

The fashion retailer Boohoo, for example, had only minimal data about the different tiers in their supply chain. The Walt Disney Company refused to answer questions before our committee in relation to the safeguarding measures it put in place during the production of Mulan in Xinjiang.

The appalling truth is that UK law lets businesses off the hook when they fail to take basic steps to guarantee that their supply chains are free from forced labour, slavery and the abuse of minorities in China. Our committee concluded that modern slavery legislation was “not fit for purpose” and needed to be strengthened.

Some companies are working hard to secure their supply chains but too many have been failing for years. So the first recommendation we have made is the establishing of a “whitelist” and “blacklist” of UK companies, updated every six months, requiring companies operating in Xinjiang to prove that they are not in breach of the Modern Slavery Act 2015.

A British company doing business in the region should have to prove that it has taken significant and clearly evidenced action regarding its supply chain to be on the whitelist. This would enable consumers to be reassured that their products have not been produced by slave labour in another part of the world. Companies that refuse to do this or to answer questions about possible links to Xinjiang would remain on the blacklist. For British businesses, who want in most cases to do the right thing, this mechanism will help them quickly and efficiently to prove they are doing so.

Our committee recommended that we Magnitsky powers to apply targeted sanctions against Chinese and international businesses implicated in human rights abuses and exploitation.

When the government introduced the British Magnitsky regime several months ago, there were no Chinese officials on the list. The UK is curiously continuing to ignore the mounting evidence and refusing to use these new sanctions on Chinese officials running prison camps.

The US has imposed sanctions on Chinese officials implicated in human rights abuses in Xinjiang yet the UK says it lacks the evidence. Why is the government not asking for sight of that evidence? As we set our own trade and foreign policy, we must not pick and choose which human rights abuses we acknowledge and which we will choose to ignore. If we’re not going to use our Magnitsky powers for gross violations of human rights like these, there is little point having the powers.

We must also ensure that we aren’t doling out international aid money to China without performing rigorous checks of our own. British taxpayers’ money must not be used to underpin human rights abuses, and I hope the government undertakes the “urgent review” that our committee advised.

In addition, the committee recommended as a matter of priority the creation of a publicly accessible digital depository on the government’s website containing annual modern slavery statements. It’s important that when a business makes a statement about its policies and supply chains, this is transparent and accessible to consumers, allowing them to access the data, make a judgement and choose, as a result, which products they buy.

As we look to a future, now that we have left the EU, of forming new trade deals, we must honour our sacrosanct responsibility never to let economic concerns trump ethical ones by dealing with genocidal states.

British consumers don’t want to enrich themselves on the back of slave labour, and British voters don’t want us to use our new found freedoms to trade with states that commit and profit from genocide. Britain is better than that.

If a country is mired in genocide we should send a clear message that Britain will not be complicit, clearly demonstrating the values Global Britain wants to live up to. Our committee’s recommendations will make that a reality.

The article can be viewed here.