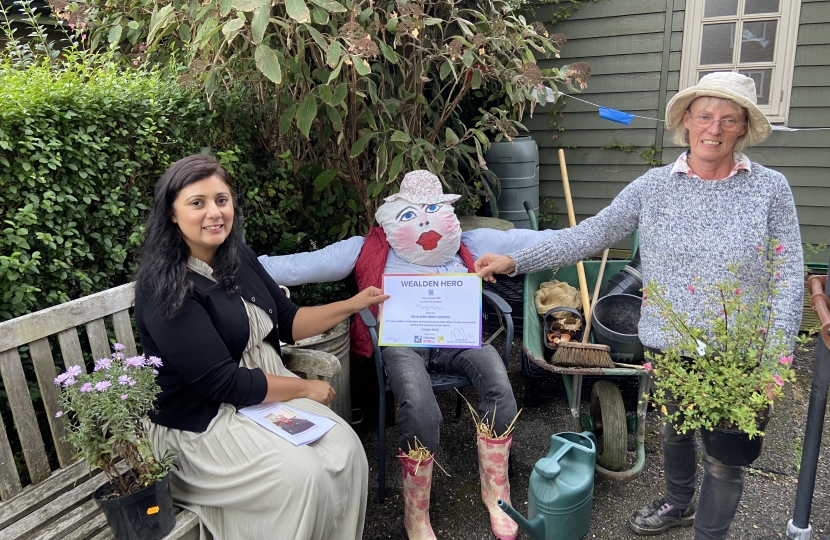 I am delighted to announce that Morag Hockin has been awarded the Wealden Hero Award this week.

Morag’s business was hit especially hard by the pandemic, as she runs a garden nursery and like many growers had a lot of stock ready for spring and summer. Unable to open the nursery and with plenty of stock, Morag set up a ‘pop up plant stall’ outside her house. For every plant sale, she made a donation to Rotherfield St Martin, a community-led charity, which helps to combat isolation and loneliness. The charity is very close to Morag as her own father had been a member and enjoyed a great range of social activities through the charity. Throughout lockdown, Morag also delivered plants to people’s doors and she held a fundraising event called ‘Not quite the Chelsea Flower Show’, where locals could drop off their entries, which she then judged. Morag ran the event on Facebook to raise awareness the charity and held a socially distanced evening for people to pop by and see the winning exhibits. She has done an incredible job and raised over £1,500 for the charity, which will be doubled to £3,000 through the Big Give Scheme. Congratulations, Morag!

In July 2020, I launched the ‘Wealden Hero Award’ to extend my thanks and gratitude for the efforts of Wealden residents to overcome the many challenges posed by the Covid-19 pandemic, and to celebrate the many acts of kindness and community spirit throughout the crisis. I know that there are man