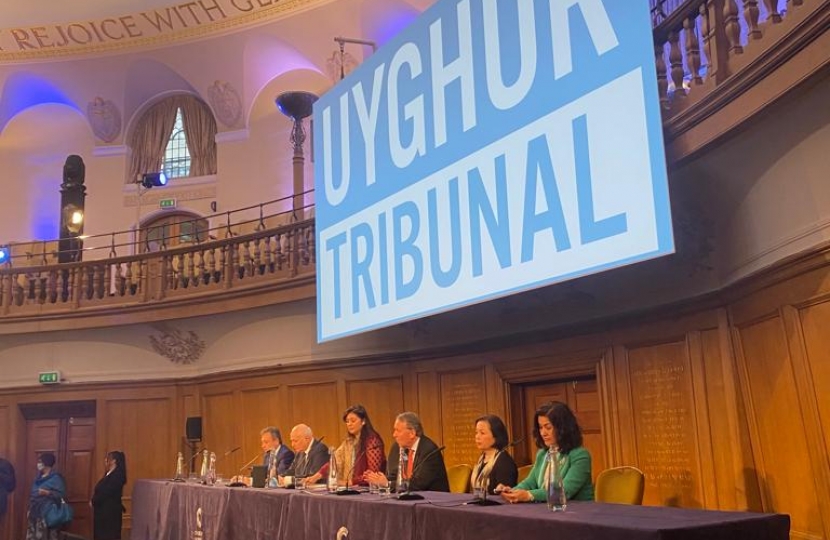 Nusrat Ghani, MP for Wealden, attended the Uyghur Tribunal and heard its historic verdict that a genocide is taking place against the Uyghurs in Xinjiang at the hands of the Chinese Communist Party.

Following the verdict, Nusrat made a statement and fielded questions from the press. Chaired by Sir Geoffrey Nice QC, the Uyghur Tribunal was independent of any Government. Sir Geoffrey’s expertise in this area is undisputed, and he has an eminent track record of persecuting genocide perpetrators in the wake of the Bosnian War. Over the last year, the Tribunal has amassed by far the most comprehensive body of evidence on the Uyghur crisis in existence, consisting of dozens of interviews and tens of thousands of pages of documents. Following a rigorous and impartial process, this people’s Tribunal of objective professionals, all instructed fully on applicable law, have concluded that the PRC is perpetrating a genocide.

Speaking about the verdict of Uyghur genocide, Nusrat said:

“Today’s Uyghur Tribunal verdict is a rare moment of accountability for the Uyghur families and victims of the PRC’s regime of mass human rights abuses. It is time for the U.K. Government to stand up for the Uyghur people and stand by its UN obligations to prevent the ongoing Uyghur Genocide”.

The Uyghur Tribunal concluded that the government of the People’s Republic of China is guilty of committing crimes against humanity and genocide against the Uyghur people. This is a rare moment of accountability for the families of victims and survivors of the PRC regime’s cruelty. And I would like to take a moment to thank all of those brave witnesses who gave evidence.

The UK’s policy on genocide, reiterated by the Prime Minister earlier this year is “it is up to a competent court to determine whether genocide has taken place.” So, civil society, distressed by what was happening to their fellow human beings, built a court. The UK government has so far dodged its legal responsibilities to the Uyghur people. Genocide, they say, must be determined, not by politicians, but by the courts.

Sir Geoffrey’s expertise in this area is undisputed, and he has an eminent track record of persecuting genocide perpetrators in the wake of the Bosnian War.

Over the past year the Tribunal has amassed by far the most comprehensive body of evidence on the Uyghur crisis in existence. Hundreds of thousands of pages of evidence. Exhaustive and detailed public hearings. Following a rigorous and impartial process, this people’s Tribunal of objective professionals, all instructed fully on applicable law, have concluded that the PRC is perpetrating a genocide.

This emphatic decision must now compel the UK Government to take action in accordance with its international legal obligations.

Under Article 1 of the UN’s Genocide Convention - which the UK and China are signatories to – states have a duty to prevent genocide by all means possible and punish the perpetrators. And this obligation is triggered the moment a state learns that there’s a genocide – which the UK has today. Our Government now has a duty to engage all state craft – due diligence, risk assessment, all internal and international toolkits available – to ensure we are not aiding or abetting a genocide. As the Tribunal noted in the Bosnia v Serbia case, "A State’s obligation to prevent, and the corresponding duty to act, arise at the instant that the State learns of, or should normally have learned of, the existence of a serious risk that genocide will be committed."

Over the last year, we have led a political coalition with members from across Parliaments trying to force Governments to take action to stop this Uyghur genocide.

From January through to March, we battled to have a Genocide Amendment added to the Trade Bill, to stop the Government forming preferential trade agreements with countries committing real-time genocide and to give the Uyghurs their day in court.  The Government refused to engage.

In March, I produced a Business Committee report which examined how many products on British shelves exploit slave labour in Uyghur death camps. Businesses now have to justify how they can operating in a region where an ongoing genocide is taking place. Again, the Government chose to reject all of our major recommendations.

In April, Parliament made history by recognising – unanimously - that the treatment of Uyghurs in China is genocide, joining the Parliaments of Canada, Netherlands and the United States Government.  Yet the Government refused to act.

But one Government did act decisively – the Chinese Government. Our relentless campaign to highlight the plight of the Uyghurs has come with a cost.

We – along with Sir Geoffrey - were sanctioned by the Chinese state earlier this year, in a move aimed at stifling freedom of speech and intimidating democracies and preventing the truth on Uyghur genocide being told.

Today's verdict gives us the legal evidence to push for both Houses to urgently debate what action needs to come next.

The Biden Administration has chosen not to continue “business as usual in the face of the PRC's [People's Republic of China] egregious human rights abuses and atrocities in Xinjiang," and is boycotting the Beijing Winter Olympics 2022. So too are our Five Eyes partners New Zealand, Australia and Canda, and our European cousins Lithuania.

With today’s verdict of genocide, it’s time for the UK Government to act. There can be no more excuses. We have a legal responsibility to act when there is ‘serious risk’ of genocide. The Tribunal’s verdict today has proved that risk far beyond a reasonable doubt. It is time for meaningful action.

Our government must carry out the review of export controls they promised in January. They must place sanctions on the architects of this genocide, including Chen Quanguo. They must put import controls on the products of Uyghur slave-labour. And they must acknowledge, in public, that the Chinese authorities are committing genocide against the Uyghurs, and engage with their legal duties to protect the Uyghur people.

51 years ago the United Kingdom signed up to the UN Genocide Convention, designed to ensure that atrocities like those that happened during the Second World War could “never again” take place.

Yet in the 75 years since the Nuremberg trials, the UK has never succeeded in recognising a genocide while it was ongoing.

With today’s verdict we have a chance to put that right.

Never again should mean just that: never again.  I implore the Government to stand up for the Uyghur people and stand by its UN obligations to prohibit acts of genocide.

The Tribunal's Summary Form can be read in full here. Coming in at some 63 pages, it maps out in analytical detail how the PRC is committing genocide against the Uyghur people, and noted "governments have no courage to do such things; neither does the UN where a powerful state is involved" when it comes to going through the process of holding powerful countries to account for genocide.