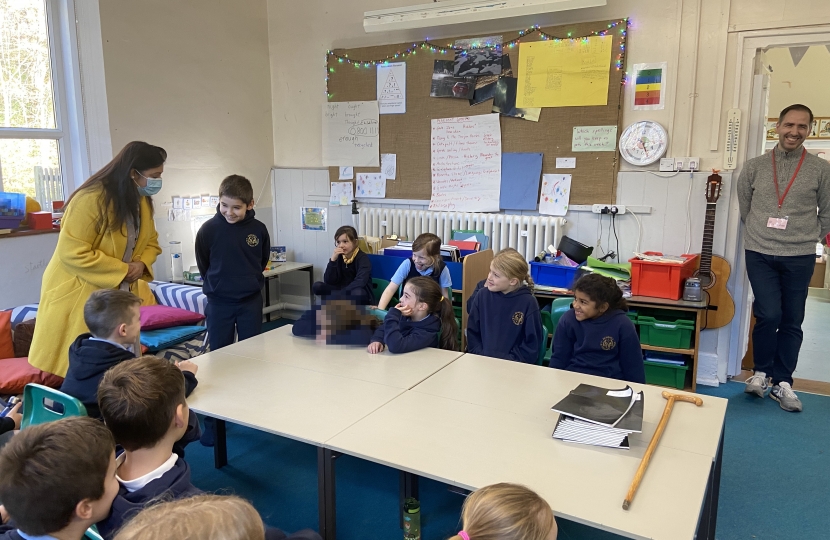 Nusrat Ghani, MP for Wealden, has visited Danehill CE Primary School to talk about democracy and parliament and take questions from Year 3 and Year 4 pupils.

Danehill Primary school pupils have been doing a project on Ancient Greece, focusing on what democracy is, what it means, and why it is the best system of governance. During the visit, the class quizzed Nusrat on her role and responsibilities as Member of Parliament and they had the opportunity to act out the roles of the Prime Minister, the Leader of the Opposition, the Speaker, Ministers and Backbenchers.

The pupils were particularly interested in climate change and protecting the environment, which are some of Nusrat’s priorities in Wealden. The class engaged Nusrat in their ideas on how to take better care of the environment by stronger involvement of local farmers, residents and organisations as well as AI technology in planting more trees and litter-picking.

Nusrat Ghani said: “It was a pleasure to meet the pupils at Danehill CE Primary school and get them interested in the works of our democracy and our parliamentary structures. The questions were a great testament to the great education that they are receiving at Danehill Primary, and I’d like to thank their teacher, Mr Waters for preparing our young generation so well for the future. There were some fantastic suggestions for new laws on tree planting which I will consider taking forward and I hope to host Danehill Primary pupils in Parliament soon for their first-hand experience of Westminster.”