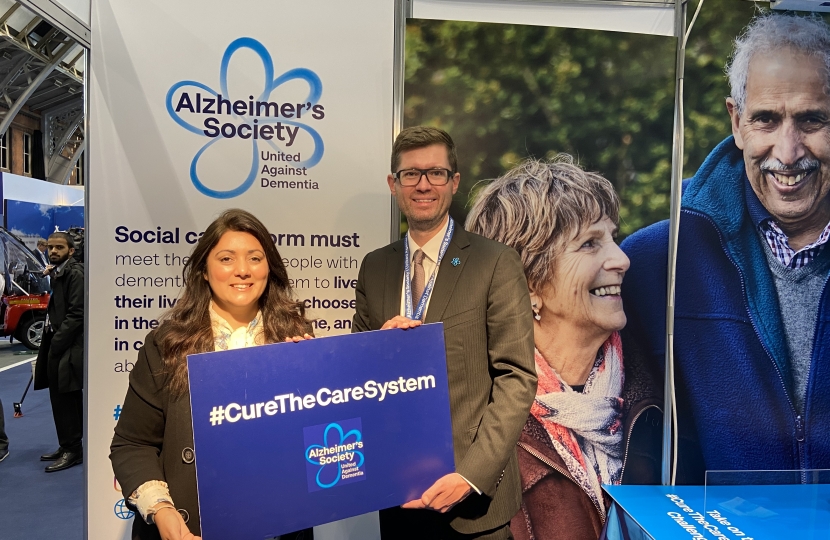 Nusrat Ghani, MP for Wealden, has visited the Alzheimer's Society exhibition stand at the Conservative party conference in Manchester to discuss social care, support for people with dementia and support for carers across Wealden who look after loved one’s suffering from Alzheimer’s.

Nusrat has been a constant supporter of charities working with dementia, including as a former Chair of the All Party Parliamentary Group for Older People, as well as hosting and running debates in the House of Commons and launching the Sussex Elders’ Commission report in 2016 which addressed safety for older people. Since 2015, Nusrat has been a Dementia Friend, an initiative run by Alzheimer’s Society that gives people a better understanding of dementia and how they can help.

Nusrat is a strong supporter of Wealden's dementia charities. She is supporting Rotherfield St Martin in becoming a truly dementia-friendly community and supports ENGAge is a Wealden charity based in Hadlow Down providing personalised day activities with an emphasis on friendship and fun through its two clubs. The TN22 Plus Club meets the needs of people with mild to moderate dementia, while its sister club - the TN22 Club, is a social lunch club for those aged over 60 that are lonely or isolated.

Our charities are playing a crucial role in our communities, supporting those who are most in need. In a year of unprecedented disruption, we relied upon our charities more than ever. I'm the patron of Hospice in the Wealden regularly work with the following charities: