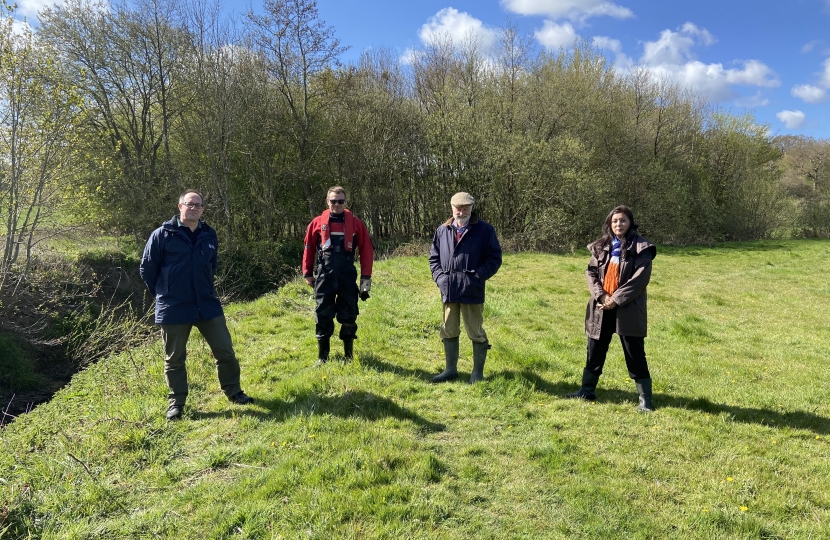 Nusrat Ghani, MP for Wealden, has visited the Eridge Stream to see the work completed as part of the habitat improvement project for which she secured a £20,000 grant.

The Eridge Stream, a major tributary of the River Medway, is managed and fished by two Wealden angling clubs, Crowborough & District Angling Association and Dorset Arms Angling Club. However, a combination of land use issues, in-channel structures and bank erosion were obstructing access restricting fish communities from reaching their full potential.

As Vice-President of the Dorset Arms Angling Club, Nusrat raised the matter with the Environment Agency and held talks regarding opportunities to improve habitat quality in the stream. As a result, the Environment Agency awarded a grant of £20,000 last year, to support the project. Tonnes of High Weald ironstone gravel as well as wood were introduced to the stream to form new spawning sites for trout and other fish and change the stream to a more favourable habitat of fast-flowing ripples. The success of the project is already showing as new colonies of fish have been spotted in the improved section of the stream.

Nusrat Ghani said: “Looking after our environment is one of the most important matters in Wealden. I am pleased that my campaigning to secure improvements to the Eridge Stream has had an impact and that the Environment Agency has made this funding available. It was great to have representatives from the EA on site to show the fantastic improvements to myself and Mr Gibson as Vice-Presidents of the Dorset Arms Angling Club. The habitat improvement project on Eridge Stream and the growth of its fish population will be of great benefit not only to the members of the angling clubs, but also to the local environment as a whole.” I am campaigning to secure more Government funding for Wealden at every given opportunity.