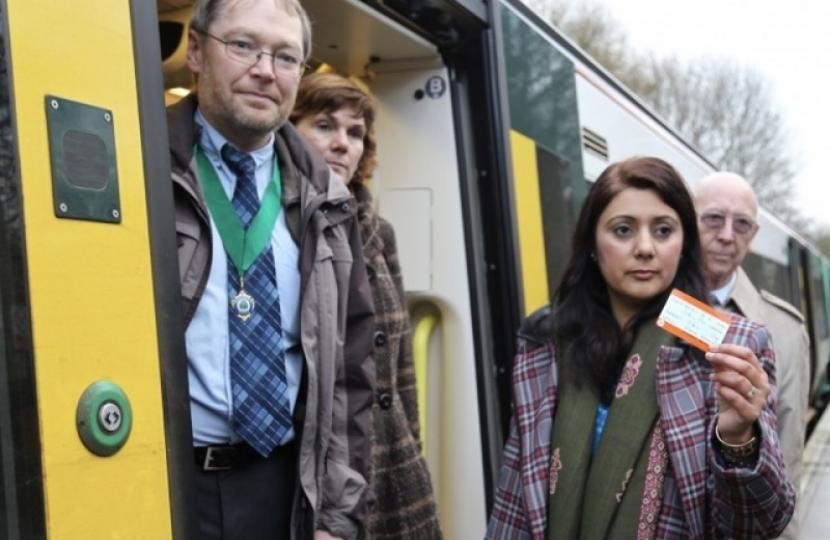 Last Friday the independent Gibb report on the Southern Rail Network was published. The report covered the woeful service on the Uckfield line and made two key recommendations that support Nus’s campaign to improve the local train service.

Second, The Gibb report also recommended that stabling facilities for up to 48 vehicles should be provided at Crowborough, with an additional traincrew depot. This will deliver both capacity and resilience for the Uckfield line with the four twelve-car sets which would be available for peak times.

Commenting on the recommendations, Ms Ghani said: “Both of these recommendations are great news for my constituents and I will continue to work closely with my Ministerial colleagues in the Department for Transport in order to see them delivered. The Rt Hon Chris Grayling MP, has already confirmed that £300 million will be made available to Network Rail in order to improve rail infrastructure and resilience along the Southern and Thameslink rail networks. Passenger journeys on Southern’s major routes into London have doubled in the last 12 years and this funding will help our rail networks to manage this increase. But we need to do more and think long term and on returning to Parliament yesterday I have already tabled questions to the department to scope funding and a timetable. The Gibb Report makes it clear that the only long term solution for this line is electrification and I will continue to campaign with the endorsement of Chris Gibb.”

The report also tackled the service provided by Southern, and ultimately stated that the main cause of widespread disruption on the Uckfield line has been union action on spurious grounds when all jobs are guaranteed and the safety of Driver Operated Only (DOO) trains operate across Europe, elsewhere in the UK and all new trains are produced as DOO.

Coinciding with the release of the Gibb report, ASLEF and RMT announced further strikes over pay and driver controlled operation. This action is entirely unnecessary and irresponsible and it will cause passengers more misery and disruption.

Commenting on the strikes, Ms Ghani said: “It is irresponsible for ASLEF to continue to make passengers lives a misery with yet more strikes from the 29th of June. The ASLEF executive recently rejected a generous pay deal for Southern drivers of a salary increase of almost 24%, to a basic salary of £60,683 for a four-day week. It is unacceptable that the trade unions continue to hold passengers to ransom and I urge them to call off the strikes.”