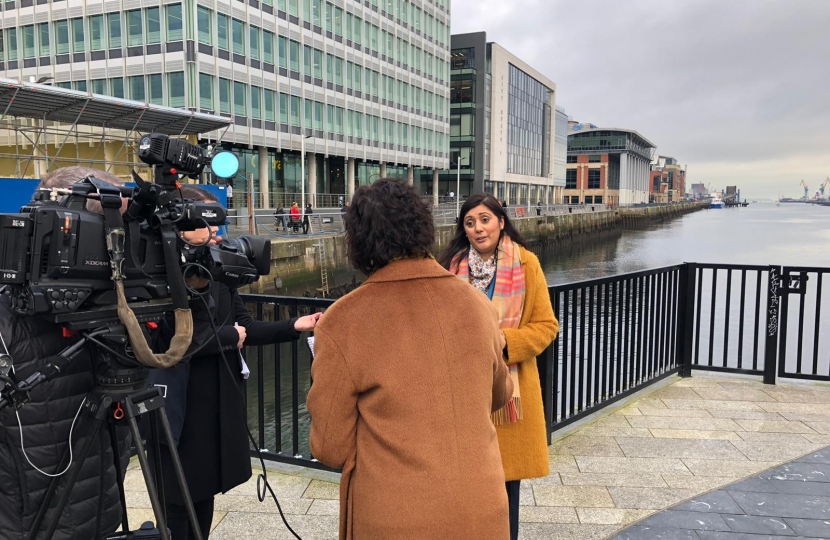 Nus Ghani MP, in her capacity as Maritime Minister visited Belfast, to mark a new treaty that seeks to protect the wreck of the RMS Titanic.

The RMS Titanic, the world’s most famous ship, built in Belfast, lies on the ocean floor, 2.5 miles under water and has hosted many discovery and recovery missions.

On her visit, Nus Ghani was delighted to announce that the wreck has now become a protected site, under a UK-US agreement ratified by US Secretary of State, Mike Pompeo, in November 2019.Under the agreement, any visit to the site must be subject to approval by either the British or the American government and obey strict rules regarding damage to the wreck and item removal.

The aim of the treaty is to limit further damage to the already-decaying wreck which might disappear within the next decade due to the harsh environment it lies in, as well as prevent the site from becoming a tourist attraction or hotspot for treasure hunters. Recovery missions have seen some 5,500 artefacts removed from the wreck, including a 17-tonne section of the hull. Items recovered from the site are usually the main pieces for auction houses the world over, with a letter written by one of the passengers selling for £126,000 and a violin reaching a price of £1.1 million.

Nus Ghani also visited the 1851 Trust’s maritime roadshow for girls. The aim of the roadshow is to inspire an motivate young girls to pursue STEM subjects in school – a prerequisite for a career in the maritime sector.

‘This momentous agreement with the United States to preserve the wreck of the Titanic means it will be treated with the sensitivity and respect owed to the final resting place of more than 1,500 lives. Over 500 households in Southampton lost someone when the Titanic sank. We must respect the site of the greatest commercial shipping tragedy in peacetime history.’

‘The work of the 1851 Trust is a strong insurance of the UK’s future as a centre of maritime excellence. Opening up the sector to girls and engaging more girls in STEM subjects are two of the Government’s most critical aims.’

‘I hope this inspires girls the length and breadth of the country, including in my own constituency, to take STEM subjects and to dream big when it comes to their future careers.’