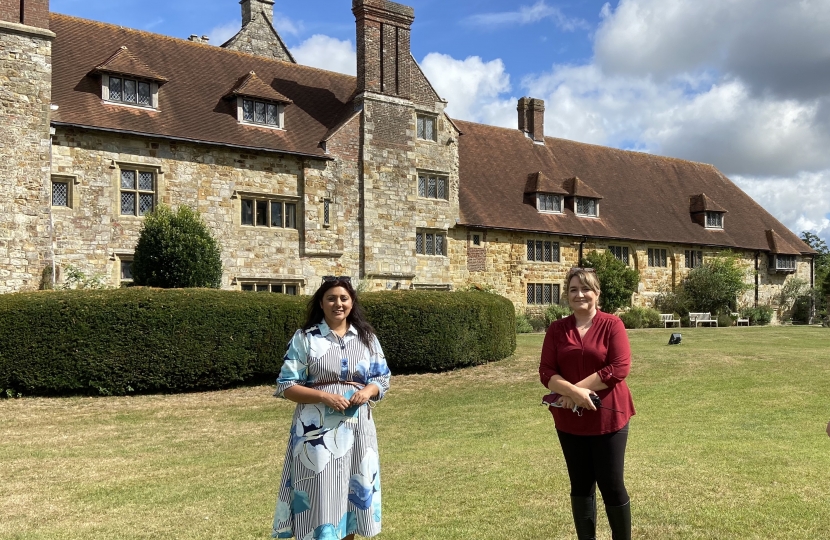 Nus Ghani, MP for Wealden, has secured an urgent debate in Parliament in support of Michelham Priory.

Nus will be raising the future of Michelham Priory and the failure of the Environment Agency in delivering its responsibilities to the heritage site and calling on Government to directly intervene and ensure the future viability of this critical local gem. The debate will take place on Tuesday 15 September.

Michelham Priory is situated in the beautiful countryside near Hailsham and boasts Britain’s longest continual medieval water-filled moat, which stretches a mile and encircles its site. However, due to gradual silt deposition and increasing invasive growth of aquatic plants, the moat has been deteriorating and has to be de-silted imminently or it will be completely lost.

The Sussex Archaeological Society have spent eight years trying to work with the Environment Agency (EA) to address the issues of water supply and desilting. The EA is failing in its duty to operate and maintain two water control structures and has not been providing ongoing water and silt management of the River Cuckmere over the past few years. As a result, Michelham Priory has been cut off from the river, meaning there is no water supply to the moat during dry weather periods. This has damaged a unique natural ecosystem and caused huge regrowth of riparian vegetation, previously cleared during preparations for desilting works.

Nus visited Michelham Priory recently to learn more about the issue and is committed to raising the case in Parliament.

Nus Ghani said: “Michelham Priory is a wonderful piece of history and I am proud that Wealden is the home of the UK’s longest medieval water-filled moat. It is absolutely vital that the issue is addressed by the Environment Agency and that the moat is restored. I am delighted to have the opportunity to raise the issue in Parliament next week and demand firm commitments from the Ministers and the Environment Agency.”

Michelham Priory is situated in the beautiful countryside of Upper Dicker, near Hailsham. It is a Grade I listed building, which became a country house in the 1930s and was home to evacuees and troops during WWII.