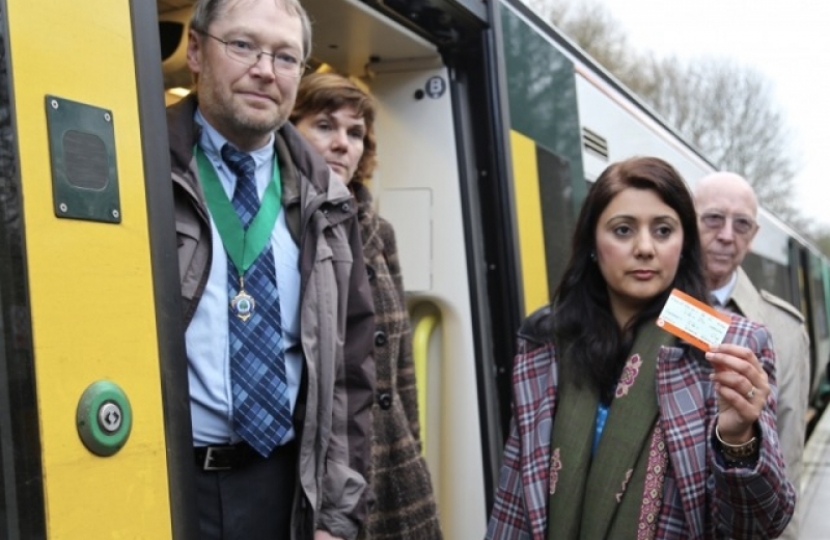 Securing improvements to the substandard rail services in Wealden is one of my priorities as your MP - I mentioned it in my maiden speech and have spent a considerable proportion of my first few months in Parliament challenging Network Rail and Southern to increase investment and improve their performance.

My approach is two-fold, focused both on existing services and rail infrastructure. With respect to services, what Southern currently offer is unsatisfactory – passengers have to put up with delays, cancellations, short form trains, overcrowding, strikes and poor communication. I firmly believe that passengers do not get what they deserve or pay for and that Southern have a lot of work to do in order to make sure that the service they provide is up to standard.

As a result, I have taken the following actions:

I also believe strongly that rail services can only improve drastically with increased investment in infrastructure. Structural improvements will relieve pressure on the system as a whole and help achieve improvements to services.

I am keen to impress upon constituents the importance of reporting poor service that they experience. The watchdog Transport Focus (@TransportFocus) collects complaints that are made, and it is these complaints that help to drive improvements. Please do report your experiences, so that they don't slip under the radar without being addressed.

I am pleased to have secured a parliamentary debate on disability access on Wealden train stations in July 2021. Having served as Transport Minister, I was responsible for delivering the ground-breaking Inclusive Transport Strategy, which paved the way to equal access to all transport networks for people with visible and invisible disabilities. 41% of rail stations in Britain currently lack step free and this rises to 52% in the South East.

I am pleased to have secured the fantastic multi-million-pound funding secured for Eridge and Crowborough stations and the recent safety upgrades to Frant and Wadhurst stations, which have had warning tactile installed and a contrasting line painted to support people with sight loss. However, Frant and Wadhurst stations currently lack step-free access and keen to keep the momentum and pressed the Minister on ensuring that these upgrades are delivered in the near future.

I stressed the need of a major investment into the electrification of the Uckfield Line a new depot in Crowborough, and pressed for the Minister’s assurances as to when this investment will take place.

I have called for and helped secure the new Passenger Assistance mobile phone application to support customers who require assistance when travelling by train. The application provides an additional option for customers to request assistance via their smartphone nationwide.

I welcomed improvements made on the Wadhurst line, which will reduce the number of delays and improve passenger journeys. In autumn 2021, railway cutting at Wadhurst tunnel was strengthened to protect the railway from landslips and other extreme weather. This project is part of the £1.25bn South East Upgrade and will help prevent disruption and delays to services along the line.

My work on this issue is ongoing, and this page will be updated as developments occur. I am firmly of the belief that the failure of a number of organisations to provide an adequate level of service is unacceptable, a view I have regularly and consistently expressed to relevant officials. I will continue to do so until there is evidence that services have improved.

Plans to create transport network in the south east revealed

It is hoped the network would be partially funded by the Department for Transport and be carbon neutral by 2050.

Plans to create a transport network in the south east of England have been revealed.

Nusrat Ghani, MP for Wealden, was delighted to attend the launch of the Transport for the South East (TfSE) public consultation on their draft strategic investment plan.

Nusrat Ghani, MP for Wealden, has welcomed the Department for Transport’s announcement that more than one million train tickets across the UK will have their prices slashed by up to 50% helping families across Wealden with the cost of living.

Nusrat Ghani, MP for Wealden, has welcomed the Department of Transport's competition launch to identify the future headquarters of the new Great British Railways organisation and is encouraging Wealden authorities to submit a bid for Uckfield.

Completion of improvement projects at Eridge railway station in Sussex

Wednesday the 16th of February saw the celebration take place with senior railway figures in attendance for the opening of the accessibility improvements.

Rail users on the right track with newly-refurbished station

A host of senior railway figures gathered at the classic country junction station of Eridge Train Station to celebrate the opening of accessibility improvements.

A host of senior railway figures gathered at the classic country junction station of Eridge, East Sussex, today (Wednesday, 16 February) to celebrate the opening of accessibility improvements that mark the final step in a transformation of the location.