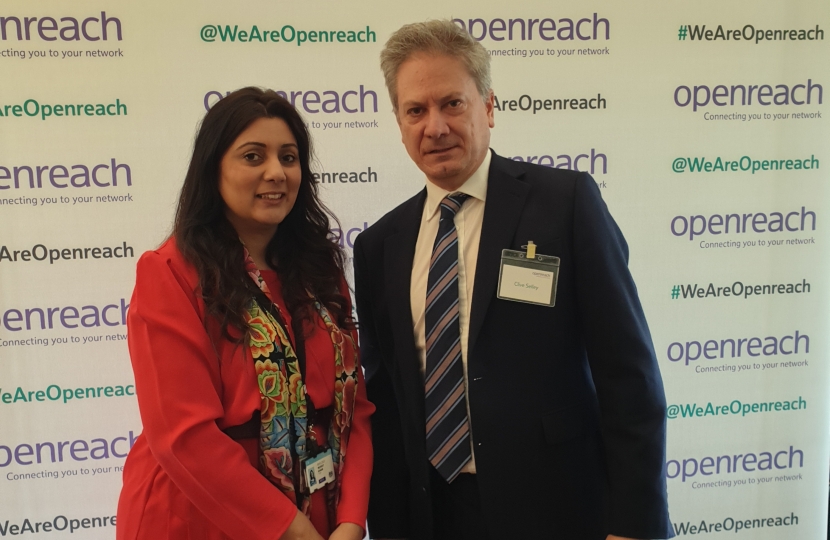 Wealden is a unique constituency, with unique landscapes and unique challenges. Broadband has long been raised by constituents and businesses as one of the top challenges in this beautiful part of the world.

A good connection is no longer a luxury – it is a prerequisite of modern life, with people needing it to book GP appointments, log their tax returns,and keep in touch with loved ones. Additionally, 40% of respondents have consistently stated that they  use their broadband connection for some form of professional use.

Ever since I first took up my seat as Member of Parliament for Wealden, I have been assiduously campaigning for better service in the constituency. In that vein, I have taken the following steps to deliver on my promise:

At the 2019 election, I was returned to Parliament on a promise to see tangible improvements by the end of the Parliament.

This election promise was not just made, but quickly delivered. Clive Selly, the Openreach CEO, unveiled an ambitious plan for building full fibre broadband facilities in 227 market towns and villages across the UK, with significant works due to start in Wealden shortly. Hailsham, Horsebridge, Lower Dicker, Upper Dicker, as well as Forest Row are the locations set to benefit from this much-awaited announcement. with work due to start .

However, I am not just taking Openreach at face value. I am checking in with them and keeping track of progress whenever I get the opportunity. Recently, I saw them at a drop-in event, in Parliament, where they reassured me that active progress is being made, with regards to finalising the Wealden development plan.

I am also delighted that the government is taking the roll-out of reliable broadband in hard-to-reach areas seriously. I have been assured that the Fair Funding Review will take into account the particular circumstances related to delivering services in rural areas. In addition, new laws will be put into place to accelerate the delivery of high-speed broadband across the country to ensure all new homes are built with reliable and fast internet.

Nusrat Ghani MP for Wealden, has welcomed the news of Openreach plans to build ultrafast, ultra-reliable Full Fibre broadband to at least three million more homes and businesses across the UK, including over 6,500 in Wealden.

Thousands of homes in Wealden will soon be getting faster broadband according to plans from Openreach.

The MP for Wealden Nusrat Ghani has welcomed the news about the broadband upgrade coming to 6,500 local homes following rising frustrations from residents.

Nusrat Ghani MP for Wealden, has welcomed the news of Openreach plans to build ultrafast, ultra-reliable Full Fibre broadband to at least three million more homes and businesses across the UK, including over 6,500 in Wealden.

Nus Ghani meets with BT over broadband issues in Wealden

Nus Ghani, MP for Wealden, has met with representatives of BT and Openreach to discuss coverage in Wealden and future improvements to broadband services.

Nus Ghani, MP for Wealden, welcomes BT’s recently announced partnership with the Department of Education (DfE) to bring free Wi-Fi access to children and families with no internet access at home.

Nus Ghani sought assurances from Openreach, with regards to their plan to start upgrades to full-fibre broadband in Hailsham, Horsebridge, Lower Dicker, Upper Dicker and Forest Row, within the next months.

Nus Ghani welcomes the fantastic news that persistent campaigning has resulted in an announcement that full fibre broadband is on its way to Wealden.

Responding to the requests of a large number of constituents, Nusrat Ghani MP met with BT Openreach to discuss the woeful internet provision in rural villages across Wealden.

Update on Broadband in Wealden